A Christian Movie that Embarrasses Christianity 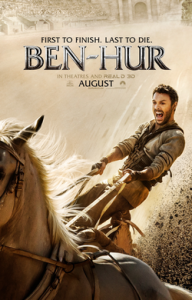 The new Ben-Hur is bad. As scathing reviews have noted, this implausible remake is treacly, pietistic and rushed. Replete with gooey flashbacks and clunky transitions, it begins with the famous chariot race, just in case we didn’t think the central Ben-Hur-Messala relationship would climax there.

The clunky dialogue is dependably risible: Upon hearing Jesus preach, Judah remarks, “Love your enemies? That’s very progressive.” The male leads appear to be unaware that, despite the film’s location, they are not acting in in a nativity play. Deservedly, the film is on track to be a financial failure of epic proportions, costing a whopping $100 million but grossing a meager $11.4 million on its opening weekend.

I, too, disliked the new Ben-Hur, but not simply because it is bad. Nor can I put my objection down entirely to my man crush on the late, great Charlton Heston or my nostalgia for the 1959 masterpiece. The bigger problem is that it’s another movie made by Christians that fails to do justice to their faith.

The original novel, Ben-Hur was published in 1880. It tells the story of a Judean prince, betrayed and condemned to slavery by his Roman friend, Messala, who then returns to seek revenge. Its author, Lew Wallace, gave to his story the subtitle, “The Life of the Christ.” The interweaving of Judah’s story with Jesus of Nazareth’s was a key element of the novel (and its 1959 film adaptation). In Ben-Hur (2016), these scenes are even more prominent. Yet simply within the logic of the narrative, its portrayal of Christ is implausible.

In the new Ben-Hur, the conflict in which Judah Ben-Hur becomes caught up is between Jewish zealots, who are intent on casting off Roman rule through violence, and Christ, who ignores politics and instead performs small acts of mercy and love. The trouble with establishing the conflict this way, however, is that it delivers up a distinctly “quietist” account of Christ. He is presented as an apolitical leader uninterested in challenging unjust institutional structures, in taking on the powers that be.

But if you know anything about Second Temple Judaism at this moment, when it coincided with the Roman Empire at its zenith, you know that this depiction does violence to the more complicated historical truth about Jesus of Nazareth. Yes, he rejected armed insurrection, but his teaching was politically subversive.

When the Sanhedrin takes Jesus to Pilate to sign off on his execution, they present their case against him in a way they know will alarm their Roman overlords:

And they began to accuse him, saying, We found this fellow perverting the nation and forbidding to give tribute to Caesar, saying that he himself is Christ a King (Luke 23:1–2, King James Version).

What we’re faced with here is not quietism. Why? The Gods had entrusted to Caesar alone the task of establishing the “peace of Rome”—reconciling all nations under its rule so they could prosper. Therefore Jesus’s claim to be a king, even a king who didn’t aspire to conquer by force, implicitly commandeered Caesar’s prerogative. As New Testament scholar Joel Green writes, “The charges on which Jesus was presented to Rome’s representative, Pilate, urge that Jesus had run afoul of the religio-political order, the world as it had been determined to be by the Gods.”

By missing all this, Ben-Hur (2016) sacrifices the basic sense, not just the drama. Jesus’s ministry of love, Pilate quips at one point in the movie, is more dangerous to the Roman Empire than any uprising. But in the context of the film this rings hollow. Why exactly would that be dangerous? Christ sauntering around distributing bottles of Evian is the best thing the Romans could possibly wish for.

Even on moral grounds, Ben-Hur’s understanding of Christ’s message falters. The story is driven by two different plots. First, we have the revenge plot—Judah getting his own back on his archenemy Messala. Second, we have Judah apprehending the beauty of Christ’s message of forgiveness. The problem, of course, is these plots pull against each other. Revenge and forgiveness are alternatives. You have to pick. Or as the 1959 version did, you manipulate the order of events and resolve the tension chronologically.

How can chronology resolve the tension? Well, say you spend your life pining for revenge against some bastard who slept with your wife. You get your satisfaction. But this satisfaction doesn’t satisfy you and you realize that forgiveness is a better way, which necessarily entails repenting of or regretting your prior pursuit of revenge. You realize the superiority of forbearance. You acknowledge that the first route you took was wrong, and this is right.

But in the newest adaptation, Judah’s attraction to the two themes is concurrent. When Judah hears his wife talk about Christ’s message of forgiveness, he says, and I paraphrase in order to make the dialogue more bearable, “I love it! Let me destroy Messala in the chariot race. and then I’ll get back to you!”

Ben-Hur ends up sounding like another Augustine before his conversion: “Make me chaste. But not yet!” He wants to adopt former mayor of London Boris Johnson’s policy on cake: “Pro–having it. Pro–eating it…”

Earlier this year, Ben-Hur, along with several other fifties Biblical blockbusters, received a parody from the Coen Brothers in Hail, Caesar. Now Christians find themselves in a position where they get to have a go at reviving the genre themselves. Reality TV producer Mark Burnett arrives on the scene with clout and cash, intent on re-introducing the real Jesus to Hollywood. And what does he do? He gives us an anemic, implausible, irrelevant Christ. Ironically, the Coen Brothers’ sending-up of Ben-Hur gets the heart, message and plausibility of “The Story of the Christ” far better than its remake. The satirists succeed where the devout fail.