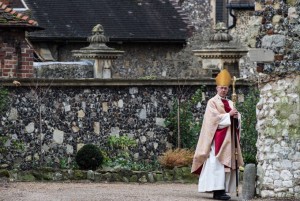 First published by The Spectator on-line on 20th January 2016

Given how apocalyptic the predictions were, Anglicanism’s make-or-break meeting about issues of human sexuality last week proved something of a damp squib. The Anglican Communion was supposed to be rent asunder. Upheaval was imminent. Schism was certain. Conservative African Archbishops were going to be tripping over their cassocks in the rush for the door. In the end, however, unity prevailed and the status quo was (boringly) upheld as the 36 primates gathered here together voted overwhelmingly to stick to the church’s traditional view of marriage. Nothing really changed: Anglican HQ merely recognised formally the break its American division has been boasting about for over a decade. So the summit ended not with a bang but with a whimper.

It is surprising, then, that the whimper has occasioned such a hue and cry. On Thursday the Labour shadow cabinet minister and former Anglican priest, Chris Bryant, declared he had left the Church of England for good. The Church’s decision will one day ‘seem [as] wrong as supporting slavery’ he tweeted. On Saturday the Times published a full-blown invective. The Church has no right, the editorial claimed, to maintain its traditional doctrine of marriage.

The outcry is indicative of a profound shift. Institutions founded on certain precepts to which its members are expected to subscribe shouldn’t be allowed to act on them if those precepts don’t square with a prevailing agenda. Back in 2013 advocates for same-sex marriage argued that the church’s beliefs about sexuality shouldn’t be imposed on the rest of society. That makes sense. But now the church is being told it shouldn’t hold those beliefs at all.

It is easy to overlook how ominous this shift really is. The conviction that organisations and communities cannot determine their own distinct ethos, their own rules for membership and their own criteria for leadership imperils the very survival of a pluralistic society. What is the point of institutions if they don’t have the freedom to organise themselves in the way they see fit?

Consider a different case. Imagine that a female student leader of a church group at a university is expected not to sleep with her boyfriend. Now, one may think chastity a ridiculously outdated ideal, even a damaging instance of repression. One may think that group’s policy, and the way they justify it, is de facto judgmental about people who don’t live by their ideal. You may think it’s harsh that those leaders get removed from ministry if they break those rules. But for all our talk of diversity and pluralism, in reality this is what it looks like. Communities in society which look and feel very different from yours being allowed to look and feel very different from yours.

The preposterous claim that the contemporary church’s view of marriage is like supporting slavery is still worth deconstructing. There are only two ways you could plausibly make this argument. First, if today’s church supported using the coercive power of the state to uphold its teaching on marriage. Secondly, if the church – simply by teaching traditional views on sexuality – is indirectly responsible for persecuting homosexuals.

On the first point, much has been made of the African Archbishops’ support of keeping homosexuality illegal in certain of their countries. But in the all-important communiqué that emerged at the end of the gathering the Archbishops, speaking with one voice, unequivocally condemned homophobia and ‘rejected criminal sanctions against same-sex attracted people’.

But what about the Church’s teaching? The way it has historically addressed homosexuality has caused so much pain to gay men and women, so I can understand why a distinction between speech and hate speech must seem impossible to draw. I can understand why so many think the historic teaching of the Abrahamic faiths about marriage is always an incitement to violence. But, again, a healthy society hinges upon the freedom of communities to have and to express their take on the most contested dimensions of human identity and morality. And in our brighter moments as a species we have shown that that doesn’t have to involve inflicting harm on members of communities who have reached different conclusions.

Take an American pro-lifer appalled by October 2015’s Planned Parenthood scandal. She sees the footage of Planned Parenthood’s medical director discussing reimbursement costs for newly aborted foetal tissue. She is appalled. She joins the campaign to block all federal funding for Planned Parenthood. We may disagree with her political action, but would we blame her for Robert Louis Dear’s murder of three people during his November 2015 attack on a Planned Parenthood clinic in Colorado Springs?

Indulge my alarmism a little further. Could the paradigm shift in view here – that communities shouldn’t be allowed to adhere to certain principles – not presage something even more ominous? We are not bereft of historical precedent when it comes to public opinion paving the way for state intervention.

We’ve heard on repeat this week the charge that Welby ‘misreads history’. The Anglican communion’s doctrines are archaic, out-dated, irrelevant to modern Britain. Across Europe in the late nineteenth and early twentieth century it was the charge of ‘backwardness’ that justified government assaults on religious freedom. So, the 1840s saw cartoons flooding German salons representing Catholics impeding the course of history, a depiction Bismarck was able to capitalise on in the 1870s. He launched his Kulturkampf (‘culture struggle’) against Catholicism on the grounds that it was ‘archaic’. In France in 1902, the acceleration of laïcité under the premiership of Émile Combes – in a single year he closed 13,000 of the country’s 16,000 religious schools – stemmed from the Third Republic’s dismissal of religion as insufficiently modern. While in Russia, Bolshevist propaganda, before and after the Revolution, consistently portrayed the Orthodox Church as an obstacle to social progress.

It couldn’t happen here, though? Totalitarianism taking root in this blessed plot, this earth, this realm, this England? What about the quadruple lock included in the same-sex marriage legislation, the series of exemptions for the church from the new law? Well, yes, but consider too Ofsted’s move only last week to ensure that every Sunday school in the country – Sunday schools! – be registered with the government so they can be monitored for what they teach? The aim is to eradicate extremism. But how elastically will ‘extremism’ come to be defined in a society that has moved, without even noticing it, from expecting communities not to compel beliefs to expecting communities not to have them?