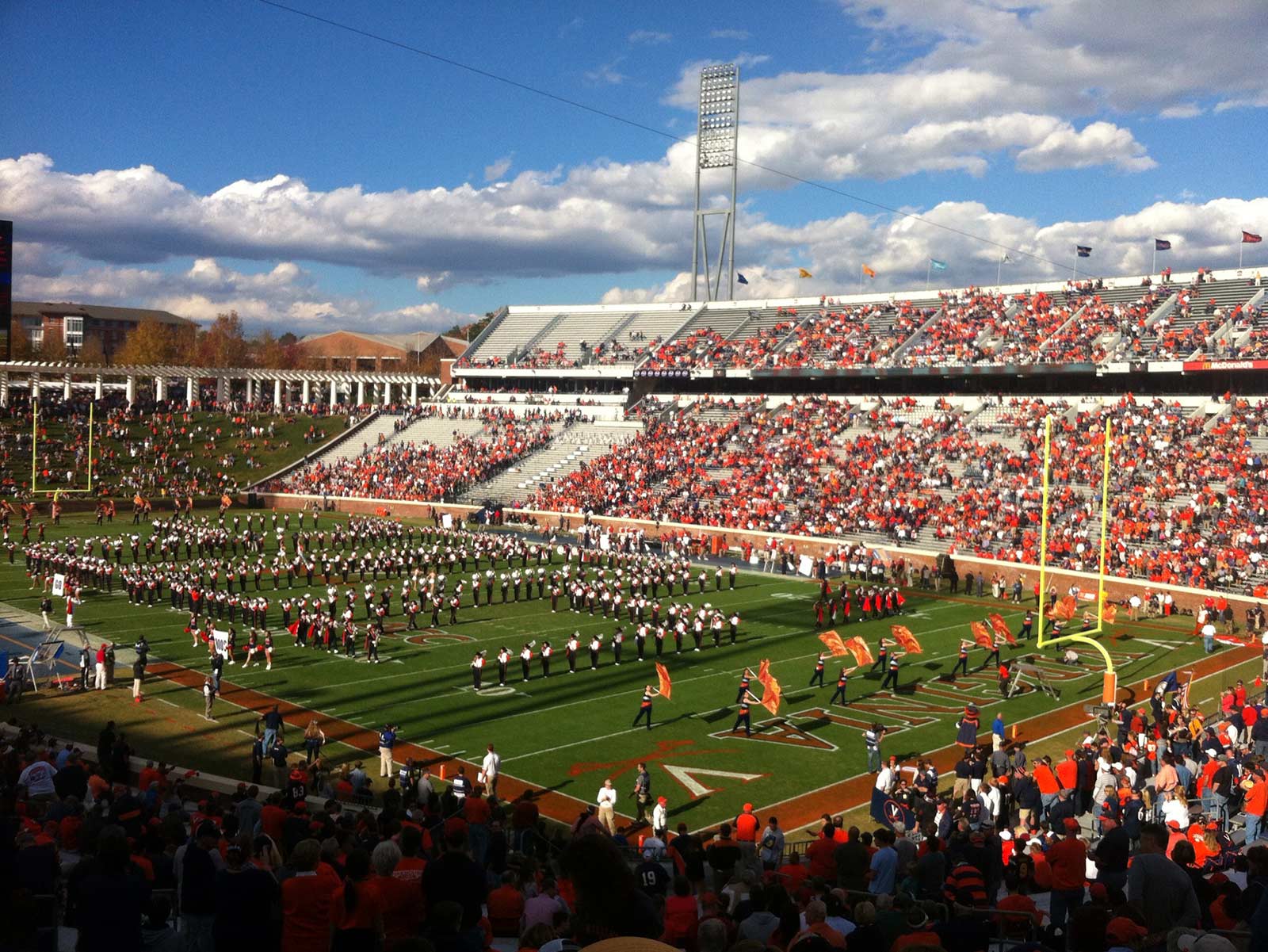 First off, it should really be called ‘Throwball’. The foot seems to have very little to do with it. The game starts with a kick, certainly. But to call it Football seems as disingenuous as calling the 100 metre sprint ‘Gunfire’ because someone starts it off with a shot.

But I’m getting ahead of myself…

It’s game-day in Charlottesville, Virginia and the spectacle is quite extraordinary. It’s not a match; it’s a pageant. In a town of only 40,000, Scott stadium – home to the University of Virginia’s ‘Cavaliers’ – holds over 60,000. And it’s packed, like a medieval city having come out en masse to watch its champions do battle – in this case 18 year-old amateurs fresh from their essays on who killed JFK. (And amateurs who – and I’ll be probably be rusticated for saying so – do seem to get crushed most weeks). Yet the dedication of the supporters is undiminished: the sea of jerseys and flags as orange as this month’s leaves.

Proceedings begin with a 300-strong student marching band – a commitment for an undergraduate of as much as 20 hours a week. With a full brass section they are not only in sync and in tune but change formations as effortlessly and intricately as the Edinburgh Tattoo. Whilst around the edges of this band baton-twirlers baton twirl and pretty gymnasts perform multiple headstand flips.

Time now for the entrance of the teams. This isn’t exactly understated either. A frenzy of fireworks erupts into the (bright blue) sky, before a stallion gallops onto the field carrying the University’s mascot – The Cavalier.

(Recall 1066 and All That’s depiction of the English Civil War: “Charles I was a Cavalier King and therefore had a small pointed beard, long flowing curls, a large, flat, flowing hat, and gay attire. The Roundheads, on the other hand, were clean-shaven and wore tall, conical hats, white ties, and sombre garments. Under these circumstances a Civil War was inevitable.)

Then come the boys. By which I mean men. Because these eighteen year-olds are menner and meaner than I’ll ever be. The flow of chaps from under the stands, emerging out of the still-lingering firework smoke seems endless. 85 of them will ‘dress’ this afternoon! Still thinking like the ‘soccer’ player I am, my heart goes out to the 74. Will someone not break it to them: their chances of getting off the bench is not good…

Until I’m informed that the majority of guys coming out onto the field – racing and waddling out in equal measure – will be involved. ‘How can it be?’ I demand to know. Well, for starters, I’m told, they have different teams for attack and defense…

Different teams for attack and defense! My indignation is immediate and acute. Where is athleticism, the sport, the stamina in that?

Then the game begins and I watch it unfold. It starts with a bit of a scuffle in the middle of the park as the real whoppers cosy up to each other, jostling like in a fight where no one wants to throw the first punch. And the ball somehow gets to the ‘quarterback’ who has a go at trying to throw it to a teammate who’s open in front of him. More often than not, that doesn’t work. But when it finally does he turns and starts to run and gets slammed down. Here we go! I leap to my feet! The game has begun!

Before all of sudden it stops almost as soon as it had started. Just at the best bit, when the guy’s on the floor, the play can open up and the ball go anywhere. Next thing I know everyone on the pitch buggers off and on strides a whole new team. Extraordinary.

As the stop-starty, staccato sport continues, I start to lament how many pathological aspects of our culture are revealed by this form of its play. For example, the division of labour whereby one guy comes on simply to take the conversion kick (apparently wearing a helmet for ceremonial reasons only). Or the managerialism whereby the incessant breaks in proceedings allow coaches to over-determine every play, thereby reducing the room for the wondrous spontaneity and decision-making-under-pressure at the heart of both the best sport and, I guess, the most ghastly battles.

But just when my disdain for American Football is almost set in stone, there comes a breakthrough – in both the game and my apprehension of it. I watch as the ball is slipped to the smallest guy on the field (though he too is still pretty stacked) and we look on as he shoots forwards at remarkable speed, with the players in front of him making an art-form of what in soccer is a clear foul – obstruction. High up in the stand you can see the symmetry of it, as players block, barrage and essentially cancel out opponents so that the narrowest of paths is cleared for the running back to rush through… to touch down without touching down, to scoring, to winning, to victory, to sport.