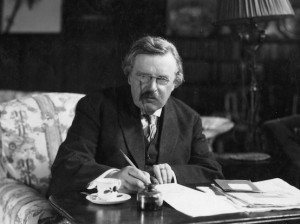 First published by The American Conservative on 13th November 2014

G.K. Chesterton offers a non-statist vision for economic and social change that’s still relevant in the age of the iPhone.

I’m not holding out for a Red October 2017, but neither am I happy succumbing to a weary fatalism about the kind of capitalism we find ourselves with today. I want to believe things could be different, but that will require more vision than can be found in our current political arguments. And its accomplishment will hinge upon inspiring rather than alienating business leaders.

This will require a vision for transformation that—crucially—doesn’t revolve around a model of gladiatorial government whereby elected representatives battle for policy changes and social justice while we sit by cheering. No, we need a non-statist vision for economic and social change.

G.K. Chesterton’s early 20th century “distributism” is a movement typically considered a spent force, which is always a good reason to pay attention to something, for finding a vision for the future often requires swiveling back to the past. It holds out just the sort of powerful vision that could very well capture the hearts and minds of business leaders.

Chesterton’s “distributist” project tried to chart a middle course (but not “Third Way”!) between laissez faire capitalism on the one side and state socialism on the other. The problem with the former, as Chesterton wrote in The Outline of Sanity 10 years after the Russian Revolution, was that “The practical tendency of all trade and business today is towards big commercial combinations, often more imperial, more impersonal, more international than many a communist commonwealth.” While of the alternative, Chesterton said, “the point about Communism is that it only reforms the pickpocket by forbidding pockets.”

Instead, Chesterton picked up and ran with what we might call the Lockean strain in Pope Leo XIII’s famous encyclical Rerum Novarum, the emphasis on the natural integrity of private property. For Chesterton, ownership is a self-evident good, which therefore shouldn’t be abolished but widely distributed. Similarly, profit is a good thing, in fact too good a thing not to be shared. Accordingly, what Chesterton took issue with in the then-current defense of capitalism was that it was a “defense of keeping most men in wage dependence; that is, keeping most men without capital.” This conviction compelled Chesterton to lambast big business (which backfired when big chain of news stands refused to sell G.K.’s weekly); to monitor and oppose mergers; to advocate independent proprietorship; and to pronounce on every possible occasion that “small is beautiful”.

What possible relevance, though, can distributism have in globalized 21st-century economies? Economies where self-employment makes up so small a proportion of overall employment? In economies that produce complex, specialized goods from iPhones to aircraft?

Well, I think we could envisage in our economies a radical increase in the rate of self-employment—by which I mean, proportionately, a small increase! Small but significant. For, excitingly, many of the jobs that lend themselves to self-employment—bike shops, cleaning, landscape gardening, building trades—are entry-level. Ownership can be most achievable for some of the most disadvantaged and for the longest unemployed.

Policy circles at the moment, in the U.S. and the U.K., are abuzz with talk of how transformative “interventions” can improve someone’s life—interventions like the Family Nurse Partnership, or other types of mentoring for isolated young mothers. The distributist vision will require interventions as well, but interventions undertaken by men and women in the business community who give their time and energy to mentor young people at risk of crime, those coming out of the criminal justice system, or the long-term unemployed, all with the aim of giving them the confidence to set up their own productive, self-owned businesses.

How else might the distributist vision be achieved? Many on the right say that the best thing men and women in the business community could do for the poor is to start companies. Absolutely, but what about starting companies that the poor have a stake in from the very start?

Take a rural example: I have a friend who has made a significant amount of money, with which he has purchased a farm. But instead of working the land for him, the worker keeping the pigs will run the business with my friend, will co-farm, and will then share the profits.

Interestingly, however—as Jay Corrin notes in his excellent book Catholic Intellectuals and the Challenge of Democracy (University of Notre Dame Press, 2002)—Chesterton’s promotion of ownership and concomitant dismissal of wage-dependence led, in the General Strike of 1926, to the distributists strongly disapproving of the central demand of the trade unions: an insistence on a living wage. As Corrin says: “Focusing on the issue of wages, they argued, would only serve to perpetuate the division of property between employer and employee.”

At this point, though, Chesterton was running so far with the Lockean strand of Rerum Novarum, he left behind its other emphasis: the living wage. We can’t afford to make that mistake. For the truth is we don’t have time to wait until the elimination of “wage-dependence”; something needs to be done now about the low-wage economy. More specifically, the poor deserve a “floor” in terms of income—in the form of a living wage.

In the UK there have been two recent political attempts to respond to Catholic Social Teaching: Phillip Blond’s Red Toryism—focusing more on Chesterton’s distributist vision—and the Blue Labour movement developed by Lord Glasman, a Jewish political philosopher. His thinking and activism bears the impress of his appreciation of what he called the precious “gift” of Catholic social teaching. For as a community organizer, Glasman is adamantly anti-statist. Only by lobbying companies one by one, he insists, bringing management into direct relationship with their low-paid staff, should the living wage be campaigned for.

Returning to America, the task of tackling poverty can seem overwhelming. The U.S. has the highest incarceration rate per capita in the world, while drug use is so endemic that it would now seem that opium is the opiate of the people. But chief among our priorities must be to increase ownership amongst the poorest and to ensure them a living-wage “floor.”

How will this be accomplished? Not mainly through government. No, this vision will be accomplished by envisioning, rather than alienating, business leaders; envisioning them to do things differently in the capitalist economies in which we find ourselves.