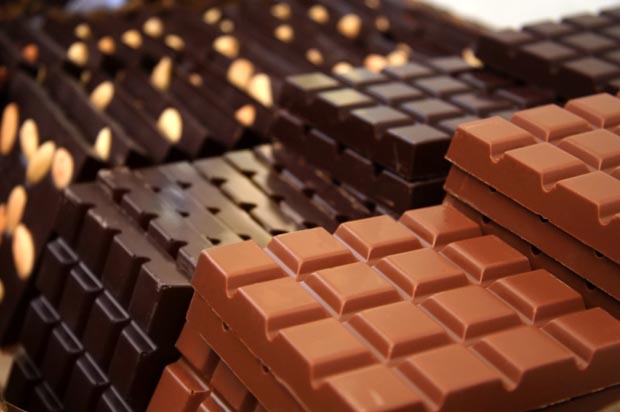 First published by The Spectator Life on 29 November 2014

Mr and Mrs Smith: they have nothing on us. Their conflict, mere child’s play. Because since moving to America last summer my wife and I have been engaged in an increasingly frenetic game of cat and mouse over chocolate.

I only have myself to blame, because in a moment of madness I swore to give up chocolate, the substance which brings much pleasure and many pounds.

The logic went like this. 1. American chocolate is dreadful. 2. I am not tempted by dreadful chocolate. Therefore, ceteris paribus… 3. I will not eat chocolate in America.

But the premises were false.

First, naively did I assume that the America I knew as a child, when the chocolate options were exhausted by Hershey’s Kisses and Reese’s Pieces, would be the same country I encountered a quarter of a century later.

Imagine, the shock when I discovered the most dynamic economy in the world had changed. Shop called Trader Joe’s: ruinous. Chocolate wasn’t hidden away on aisle 14b. It was ubiquitous; my sin before me. At every checkout, hanging from the ceiling, poking between the vegetables.

My second premise grossly under-estimated the power of addiction. Declining even Hershey’s means an ascetic effort not seen since the pimpled Augustine stopped wanking. In those low moments — when self-esteem tanks, after a yellow card, during writer’s block — I have indeed partaken of peanut-butter-based chocolate.

So my reasoning was flawed. What of it? The problem arose when my wife, not unreasonably, began to hold me to the bargain. But no sooner were my rogue chocolates smuggled home, in a stolen moment I would find my hiding spot raided. I had to be more imaginative. So I snuck pralines down the side of cereal packets; deposited orange creams among my socks; squashed chocolate drops between cushions. Yet it was not long before an infestation of mice alerted Mrs Mumford to each broken promise. And every time she found the treasure she buried it elsewhere.

It’s not true to say my habit is irregular. At 4.15 a.m., without fail, I’m thrown out of bed with a sugar craving (the passive voice betraying the addict) and driven into the arms of my ganaches. But after the purge which followed the mice, I was left to wander the hallways. Turn the kitchen upside down. Try the toolbox. Empty the Scrabble pouch. (It transpired Holly had hidden the chocolate in the one place she knew I’d never find it: the oven.)

The secret of warfare is being able to adapt. Having the courage and humility to recognise when circumstances have changed. So I made the difficult decision to abandon the house. It was an arena she had conquered. From now on, I would stash the chocolate in the car, stuffing the glove compartment with malt balls. But no one could have foreseen the fallout.

The first night of the new regime we retired to bed as usual. I brushed my teeth (a brilliant diversionary tactic). Blew out the lamp and she saw not the smile which creased my face. I drift to sleep in the knowledge of what was in the car.

It’s 4.15. Not a creature is stirring. Huge rush, I mean huge; and way too excited to worry about pulling trousers over my shorts or a coat over my T-shirt. I race out. Before I know it I’m in the car, gorging myself, allowing malt balls to dissolve deliciously in the cave of my mouth. (Also: when I say ‘malt ball’, envisage not the humble Malteser. These things have a chocolate coating ten times thicker.)

Five minutes later, the glutton droops back, sleepy and happy, reaches for the door handle. A sharp pang. Oh God. It won’t rotate, the crooked key-lock remaining stubbornly perpendicular. I take a breath. Don’t panic. Of course it’s locked. That’s why one puts the keys in one’s pocket before one leaves the house at four in the morning. I duly slip my right hand into the pocket of my shorts. But it’s empty. I pat down my left side. Nothing.

I’m rapping on the pane. She awakes. In a new house in a foreign country. Turns in terror to find her husband’s not there.

Ten minutes later, as I’m starting to shiver, a figure finally appears in the hallway, wrapped in a dressing gown. She steps forward tentatively. Peers. Sees me.

She throws the light, standing tall and still. Stares. Bag of malt balls: she sees it. She thinks for a beat. Then, in a moment of pure grace, flicks the lock, leaving me to open the door and follow her to bed. As I swivel round to lock the door behind me I catch my reflection in the pane. There’s chocolate smeared across my cheek.