Going to Church in America 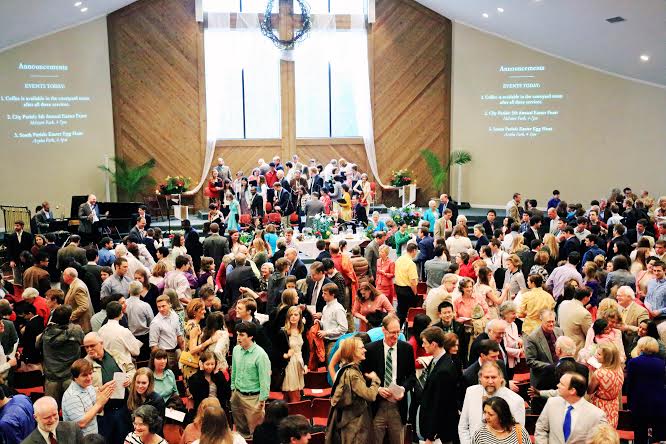 We are late for church. It’s Sunday morning in Char­lottesville, Virginia, and we’re late for church. I pull up in the car park, and my wife and I get out. We rush to the entrance, and I swing wide the door and hold it open for her. And then we find ourselves in a wide vestibule area.

The carpets, weak olive. The walls, light gray. Colors no one would live with, as Updike says.

But we can’t be that late, because smiley people—blazers and bow­ties—are still there to thrust pro­grams into our hands.

I lean forward and gently pull open the doors of the sanctuary. What we find inside is quite aston­ishing. It stuns me. It stuns Holly. It is beyond our wildest imaginations. I simply have no frame of reference for the sight that greets me.

Inside the sanctuary, what we find is . . . people.

Real and alive human beings. Plu­ral. And not just people paid to be there. The clergy face an actual con­gregation, people who have volun­tarily decided to spend their Sunday morning in this fashion.

Why am I so astonished? I am as­tonished because I am a Brit who has just moved to America, and while in Britain we have lots of churches, some extremely beautiful, sadly too many of them are usually empty, even on Sundays. Last time we counted, considerably fewer than one in ten Brits goes to church weekly.

This church, however, is full.

It’s been a busy week, our first week in Charlottesville. (I’m here to take up a postdoctoral research fellow­ship at the University of Virginia.) This is what our to-do list looked like on Monday (not ranked in order of priority): Cell phone contract with in­ternational call option. Sign up to an affordable gym. Bank account. Find a church.

With the first three items crossed off, right now we’re working on num­ber four. We’re cherry-picking, basi­cally. But I suspect that this church is where we might land, since this ser­vice is already exceeding all expec­tation in terms of attendance—that is, exceeding all expectation because there is attendance.

This church happens to be Pres­byterian. But I don’t hold it against them. Denomination is not a key cri­terion for us. Denominationally, I’ve always been highly promiscuous. I began life in a so-called low church, so low it met in a high-school audito­rium. But it was kind of rootsy, con­stituting what only Anglicans would deign to term “non-conformist,” believing as only Anglicans do – in good Catholic fashion—that theirs is the one true church (“the Church of England is the church in England”). As an undergraduate, I defected to the Anglicans anyway. It was a mat­ter of principle, the principle being that the girls were hotter.

To mix it up yet further, my aca­demic research has focused on Roman Catholic philosopher-theologians—much stronger on ethics and politics, in my view, though my grandmother would turn in her grave to hear me say it, virulently anti-Catholic as she was. “When the college of cardinals elects a new pope,” she used to say, “they release smoke through the chimney of the Sistine Chapel . . . Blue for a boy, pink for a girl . . .”

Brought up low church, I have found strange, passing strange, the recent lurch to the liturgical among some Evangelicals.

Not long ago, I visited a new church plant in the South. It met in a school gymnasium; again, no problem for me (nostalgic, in fact). What was weird was what they tried to superimpose onto this setting. Rather than simply settling for informal, conceding ca­sual—a gymnasium!—they instead projected an image of a stained-glass window onto a screen behind their makeshift altar. And then the fully robed clergy processed in along the three-point line, singing and gently swinging their thuribles of incense. Each thing should be the same with itself and different from another.

Back in Charlottesville, we search for seats in the packed sanctu­ary. Finally finding two next to each other, right in the middle of a row, my wife begins to shuffle in. And I’m about to follow her until, sud­denly, I realize I’ve got my priorities wrong. I forgot to get coffee. “Back in a sec.” I shoot back to the vesti­bule, before being directed by stew­ards down various hallways out into a different reception area and—lo and behold—a coffee table. The only other soul is a kid adding a splash of water to the thick pulp of hot-chocolate powder in his polystyrene cup. Soon I’m pumping down vigor­ously on the coffee thermos to flush out every last drop. Having filled a cup, I reach for the stainless-steel jug marked “Half and Half” (some kind of cream, I think).

You’re not going to believe what happens next. The jug is empty. Still reeling from the crisis, I troop back despondent.

As the service gets underway, two things strike me. First, there’s a lot of standing up and sitting down. Li­turgical gymnastics. I needn’t have joined the gym. Coming from a low-church background, even a modicum of liturgy seems a lot.

Second, the acoustics are dread­ful. They say every architect has a cathedral in him, and also that ar­chitects never actually have to go to the churches they design. Here, the combination of a grand vaulted ceil­ing and flat walls causes the sound to bounce so much that, when the an­nouncements are given, it’s like we’re in a railway station.

Nothing, though, can detract from the worship that ensues. None of this early-nineties soft-rock, poor-man’s Coldplay malarkey. Instead, com­plete with string arrangement and banjo, the director of music strikes a brilliant balance between musically accomplished and genuinely par­ticipative. Plus, it’s as if they’ve been briefed, because we start with “Come Thou Fount of Every Blessing,” my favorite hymn, the one we had at my (sorry, our) wedding.

He to rescue me from danger / Interposed His precious blood

“Interposed”? Yes. What a word.

As things develop further, I begin to feel a genuine sense of disappoint­ment. There is little suggestion of any impending crash.

Sounds terrible, but sometimes I look forward to church for the same reason that I look forward to Formula One (or, indeed, ski jump­ing at the Winter Olympics): for the crash. The crash usually comes in the form of “open mic,” when the minis­ter, in a moment of madness, opens up the service to the floor. I would like to invite any member of the con­gregation—any member, oh Heaven forefend!— to come and share.

In Four Weddings and a Funeral, there’s a scene where a novice vicar, played by Rowan Atkinson, com­pletely cocks up a marriage ceremony. When, jittery, Atkinson gets up, John Hannah leans across to Hugh Grant: “Friend of the family.” “Ah, excellent!”

Well, that’s what I whisper in my wife’s ear whenever a minister omi­nously declares the mic open.

I was once in a church in Texas. The minister: “Anyone?” Prolonged, painful silence, before, finally . . . movement in the third row. A stout older lady—long floral dress—tries to shuffle out. She’s making her way up the aisle as if each step is a leap of faith. When she eventually reaches the front, the continuingly guileless minister hands her the mic and steps back. She begins with the requisite, “Thus Saith the Lord” . . . before closing her eyes and . . . breaking into song. In a low, powerful, dis­cordant voice:

My little ones, return to me and I will return to you,

This is the springtime season of my love . . .

She’s warbling through some Old Testament text, and it seems interminable.

Back to this morning. After a few announcements, it’s time for the ser­mon. Minister gets up. Coat and tie; beard, neat. Routine, I think to myself. Which couldn’t be farther from the truth. For what follows is an absolute tour de force. The season is Epiphany; the theme is mission; the text is Jonah:

What shall we do unto thee, that the sea may be calm unto us? for the sea wrought, and was tempes­tuous . . .

The preacher finishes the reading, looks up, looks round:

This is absolutely true. It’s also pretty hilarious. And it’s written because He loves you.

I’ve been to church all my life. Conservative estimate: Say I started fully digesting sermons when I was age . . . eighteen months? That’s 1,638 sermons, not including con­ferences. But this preacher—one of the most arresting I’ve ever heard. No British blathering. No dithering. Cuts to the chase.

First, he delves into genre; of­fers us a range of exegetical op­tions; explains the Hebrew artistry missed in translation—imposing on us with swift authority, in poet Craig Raine’s formulation. But he won’t let it become a lecture; soon he’s building a psychological profile of “the worst missionary the world has ever seen. . . . Jonah was given simple instructions on where to go, and then fled in precisely the oppo­site direction.”

The preacher continues: evocative, wry, winsome. But then he won’t let it become too lyrical either. He won’t let his rhetoric run away with itself. He’s neither indulgent nor highfalu­tin. This isn’t entertainment. “I want you to shut your eyes and imagine in your mind’s eye a group of people, a group of people whom you despise. You can say you don’t despise any­one. You can say that. . . . What I want you to do is to hold them in your mind. Now hear the word of the Lord to Jonah: ‘You are not better than them.’”

Totally convicted, I’m ready to rush forward and repent. I’m already on my iPhone, checking cheap flights to Nineveh. Altar call? I’m so there. But when the preacher finishes, in­stead of giving an opportunity to respond, he promptly sits down. At which precise moment the congrega­tion suddenly erupts into a strangely synchronized, harmonized chorus:

We disband, and meet a few folks. They’re welcoming but not weird, en­gaging but not creepy.

As we file out, my lasting im­pression is that of resolve. I’m from post-secular Europe. Here, though belonging to the late-modern world, it’s as if Americans are saying, “Church isn’t perfect. It’s not slick. But you know what? This morning we’re going to forgo flea markets and Little League. And we’re actually go­ing to do this.”

At the door we shake hands with the preacher. A little overawed, I manage to introduce myself. Him: “Anything I can get you?” My first thought: Half and Half? But he’s probably got a lot going on.