“Heavy petting” and the Garden of Eden 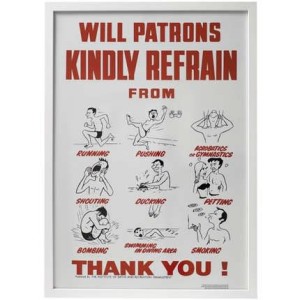 Do you remember this poster from your schooldays? I remember looking at it and being absolutely intrigued…

“Ducking” – I was aware my species couldn’t breathe underwater

BUT WHAT IN THE WORLD WAS “PETTING?”

Being pre-pubescent at the time I had no idea. But now I was curious. And so I began my journey of discovery. My awakening…

First, I discounted a few options. In some formulations of the swimming pool DOs AND DON’Ts, the table of taboos, it was “heavy petting” which was being outlawed. But I soon discovered that lobbing overweight cats into the deep-end was not what the authorities had a problem with. On the poster, it was a man and a woman who had found their way into the ‘freeze-frame’ of unacceptable aquatic activity.

Next, I reasoned with myself: if heavy petting was anything like dive-bombing, it must be pretty awesome.
It was a classic Adam and Eve case. Like the forbidden fruit from the tree of the knowledge of good and evil, “petting” was of no interest to me until I was told not to do it.

Which reminds me: do you know what the Australian definition of foreplay is? ‘Brace yourself, Sheila!’