In defence of offence 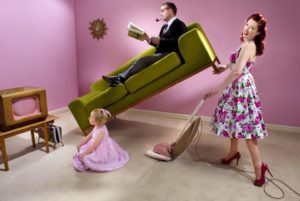 On Tuesday the Advertising Standards Authority (ASA) announced a crackdown on gender stereotyping. Adverts suggesting men are useless around the house – racing out of the door, leaving the stove bubbling over and the dishes unwashed – could be censored because they ‘reinforce and perpetuate traditional gender roles.’ Images of beautiful mothers mopping spotless floors will be able to be banned.

How do the ASA define gender stereotypes? ‘Gender stereotypes relate to body image, objectification, sexualisation, gender characteristics and roles, and mocking people for not conforming to gender stereotypes.’ Well, that’s pretty much everyone. The ASA will have the power to make billboards bare. For as far as my own body image is concerned, I don’t need to see a gorgeous half-clad model sweating with a six-pack to be mortally offended. I feel mocked simply by seeing an advert with someone vaguely within range of their BMI.

But it’s not just a question of how individuals are made to feel. It’s more serious. Stereotyping views upheld in adverts can contribute to ‘unfair outcomes for people detrimental to society in general’. Car adverts do that. Watching a Mercedes-Benz 2017 S-Class convertible hold the road under a blood-red sky makes me feel poor. Scaled up, the sense of alienation felt by NEETS could be exacerbated, leading to an increasing crime rate. Once you start trying to guess at how messages lead to unfair outcomes you can go anywhere.

Then there’s the question of what this ban presages in terms of further bans. Earlier this week Transport for London banned the phrase ‘Ladies and Gentlemen’ in an effort to make all passengers feel welcome. Dropping that antiquated terminology bears witness of course to the pace of change we are seeing over attitudes to gender fluidity. For who isn’t to say, with the ASA’s precedent set yesterday, that soon we won’t just be spared adverts of women hoovering but of women at all?

But I’m nitpicking, compared to the really extraordinary thing about Tuesday’s report: its blithe disregard for freedom of expression. There is one passing reference to free speech, in relation to the concerns of stakeholders. At ‘listening-mode’ seminars there were two distinct groups. Those in support of change ‘spoke of real-world harms relating to the perpetuation of inequality’. They’re the good guys, in case you missed it. Then there were those less supportive of change who insisted upon ‘the philosophical “right to offend” or their preference for less regulation and space for market forces to develop.’  Philosophical. Offend. Market forces. They’re the baddies, concerned only with abstruse ideas, pissing people off for the sake of it, and being horribly right wing. And that’s the only mention of them: their views get no hearing at all. Reading between the lines these were probably the folks who cared about freedom. Who thought that when the state gets into the business of banning means of communication, on the grounds of psychological harm, a line has been crossed.

I have two girls: three and one. Believe me, I’m horrified by the world they’re growing up in, a world where childhood is being encroached upon by the market and where it is being so radically sexualised. I can’t bear the thought of Connie first absorbing the idea that thinner = happier, or Vera subconsciously taking away from an advert the idea underage sex is simply another form of play. So I agree with the ASA that advertising can be nearly as pernicious as peer pressure. I share their good intentions. But I also agree with the snubbed stakeholders. In fact I think that the more fervently I disagree with the message broadcast, the more adamantly I should oppose its censure. Because by dint of the expression of ideas I dislike are expressed ideas I do like. That’s why Britain has been a beacon of light to the world. And the ASA is working to put it out.