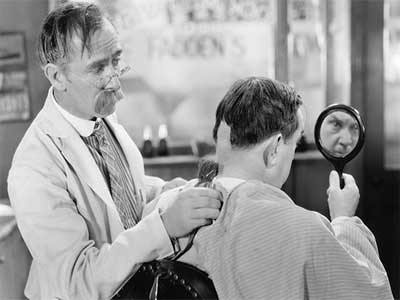 I’m at a new hairdresser’s in a new city in a new country, and my chap’s primary occupation is plunging blades into human flesh.

I look left. Glance right. Here among the blasting and strong gusts and everyone in black capes gazing at their reflections; here on linoleum tiles layered thick with wet black curls, this is where I’m going to meet my end. Oh my God. I can’t die here: I need mood lighting at the very least.

My only chance of survival is to keep him talking. We trade testimony. I moved for a postdoc at the University. I like Charlottesville a lot. He followed his girlfriend down from D.C. He likes Charlottesville a lot. It is progressive in a lot of ways and there’s a decent community for artists, and we had to get out of the city.

The downside is the limited opportunity for acupuncture. Why? Hostility of the establishment. The medical profession has set its face against oriental techniques, and politics being what they are science doesn’t want to look outside of what it knows since it’s afraid of what it might find and this is an invasion into its territory but medicine, it’s been the model for hundreds of years and integrating the psycho-social is just too much of a threat to vested interests and which product do you usually put in your hair?

Despite the gentleness of his voice, there is no doubt about it: this is man against the system. There’s intensity and conviction and despairing.

The only place in town interested in acupuncture turns out to be an old people’s home. Poor helpless souls! A captive audience, wheeled in only to be wounded. All “crippled” and “tight” and “an air of baffled absence,” as Philip Larkin put it so unsparingly. And if “inverted childhood” is not bad enough; or your dwelling place being a communal “home” where strangers are in and out all the time no big deal, constantly subject to all these light intrusions, constantly surrounded by someone’s else relatives; or having your choices narrowed to staying in your room or coming downstairs for group activities; if that isn’t bad enough, now there’s also a flood of well-meaning services, one of which involves needles.

After overcoming his initial indignation that residents wouldn’t automatically receive acupuncture, but had to give permission—though again, in this context what does “giving permission” really mean?—my hairdresser had managed to rope in some guinea pigs. He poked five “channels” into each ear of each person, and sat back and watched already pretty zoned-out elderly men and women zone out even more.

As he talks and discusses and divulges his techniques, it’s all pretty fluid: sentences peter out, claims are aborted, conclusions postponed. Intellectual gestures, mainly—”blowsy imprecision,” as literary critic Craig Raine has it. “It’s really about go-inward, kind of calm, just be, see what’s going on inside and–society is so full of external influences, you know, and that’s one of the problems—”

“Are they the same length, my sideburns?” I ask.

“What does it do for people?” Pause. People who are going through a lot of trauma, this helps them. An anecdote: This last week, one woman he punctured had arrived with some emotional liability around this trauma she was having. Manifested itself in diarrhea, but the real issue was her marriage. Her body was wanting to process it and the energy was needing to move through her and by the end of the session he’d talked her ’round: if you’re not happy in your marriage, get the hell out of there.

Obvious question: “Do you see yourself as a therapist?”

“That’s the exciting part. You can get deeper with the needles.”

What fascinates me about the anecdote is not only the unapologetic admission to what sociologist Philip Rieff called “the triumph of the therapeutic,” but the fact that therapy poses as moral counsel. Essentially, one person is telling another what to do. Now, doubtless, most “proper” therapists would disavow this strongly, fearing lest the intimacy of the spilling-your-guts-out becomes the leverage point for the therapist’s imposition of their set of values upon the client/patient. And professional therapists would probably be aghast at the amateur therapy of my acupuncturist. But still, in a secular culture the need for sage advice, for real wisdom, for instruction in the ways of life and guidance on the path of virtue—that doesn’t simply go away. “How then shall I live?”—always a live question.

George Orwell wrote an essay on Dostoyevsky where he mentions the character in Crime and Punishment who commits a crime just to be able to confess it. Orwell doesn’t get it. “This is all very Russian,” he says. But Dostoyevsky is on to something: there is something about the ecstasy of confession, the sheer emotional relief it portends, the assuaging of guilt and the raw release. The therapist’s couch is the new confessional—just more comfy, and with Kleenex.

The other thing is, Charlottesville is a small town. On a date with my wife: “Look, sweetheart, the man doing squats over there is the bartender at The Whiskey Jar.” Or you run into an esteemed professor of Renaissance sculpture at the checkout buying suppositories. So in this moment—my hairdresser telling me this story from his class—what we have really is the collision of two dynamics: tell-all therapy and barber gossip. For it wouldn’t be hard for me to find out who the woman was. Or just come across her—he told me the name of the place where he holds the class.

Still in the chair, I’m beginning to regret how long I’ve let my hair grow. The words begin to link arms and dance with each other, whirling around and around—unstoppable, making me giddy: “The whole point is to differentiate and see whether I am really owning that and do I want to appropriate that narrative and is that narrative working for you or not working for you and do I acknowledge that’s an extern—”

Also, am I free on Monday? Do I want to come and see for myself?