Struggling to pee at the NPB 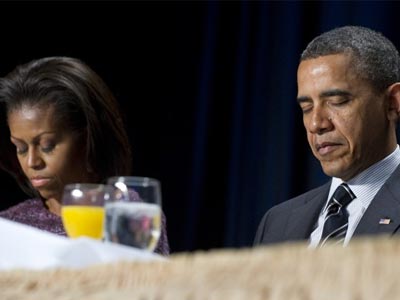 ‘It is my great pleasure to introduce to you … the president of the United States of America.’ The President rises, already on stage. He’s seated next to the First Lady on a top table facing the audience – flowers, etc. – very much like a wedding. In his wonderfully relaxed manner he limbers over to the giddy Democratic congresswoman who introduced him, taking his time to kiss her on the cheek. She almost feints. Then he moves on to shake the refreshingly cheery Republican congressman the other side of her. Then, finally, Obama no drama nestles in behind the podium.

It’s the National Prayer Breakfast (NPB) at the Washington Hilton. I’m here in the hotel. But I’m not in The Grand Ballroom. No, I’m four floors above the president in my friend’s hotel room, tucked under the duvet watching the event on the hotel’s internal TV network. Sadly, the cost of breakfasting with the President and 3,200 delegates proved prohibitive. I asked the chap who invited me whether he could lop off $1,000 if I fried my own bacon. But there wasn’t that flexibility.

The speech – on the theme of religious freedom – is Obama at his best: assured and aspirational and stirring. Last month he was criticised for not demanding Iran release an imprisoned pastor before entering talks about their nuclear programme. So today he addresses the tension between working with governments that ‘don’t always meet our highest standards’ and standing up for universal rights.

At one level, for Obama, this is just another day at the office. But what the post factum press releases leave out is the all-important context. The context is resplendent, unabashed civil religion. It’s not just the requisite ‘when I embraced Jesus Christ as my Lord and Savior’. It’s the whole carousel of contributors: from the warbly, screechy gospel singer to the young Hawaiian surfer with one arm who ‘shares’ about recovering from a shark attack; to the U.S. international development secretary exegeting The Parable of the Good Samaritan. It’s the paeans to the Pope and invocation of overseas missionary and the heavy hymns. I think of home… Harold Wilson used to go through draft speeches excising anything that sounded like the bible.

The reason the Republican is cheery is because this is the one time in the year where partisanship is not allowed to protrude upon politics, when adherents from different denominations, even different faiths, and from of different political persuasions come together in a spirit of unity to pray for the country and her leaders. Last August this chap – Louis Gohmert (R-Texas) – excoriated Obama, calling him ‘the President of division and envy and jealously’ who has done more than any other since the 1960s ‘to stir up racial tension and violence’. This morning, though, Gohmert is all smiles. Standing arm in arm with the Democratic congressman, a quip: this is probably the only time anyone will see the congresswoman to my right.

The NPB actually extends beyond the breakfast. It’s a three-day conference, all taking place in this one 1,070-room rather nondescript hotel. It’s being going since President Eisenhower in 1953 – this is the 61st.

The day before, walking into the lobby had been a daunting prospect. It was teeming with preppy interns, busting with bellboys, secret service up against every column. All these people, threading in between each other. Appearing. Disappearing. If up then en route; if sitting then in meetings – hundreds of ‘spontaneous’ little get-togethers, their relaxed cover blown by how urgently participants press in, with their extra chairs.

I hover by the front desk while my friend checks in. I really am freeloading this week, right now holding out hope that we’ll get a room with two king sizes. And what reasons will he marshal to secure two keys – he’s forgetful?

‘Where is the concierge line?’ an old white guy asks a black lady. He’s wheeled his suitcase to the front of the single unmoving bunched queue. The lady, obviously aggravated, manages to be polite. ‘There’s just one line’, she tells him. ‘BUT I HAVE ELITE STATUS!’ he bursts out.

The early ’90s soft rock is inescapable, ubiquitous; in the lifts, café, outside on the smoking platform, even over the cab rank.

In the bar a cacophony. The place must be at three or four times capacity. We head for the restaurant bit. Stand waiting; debris of abandoned lunches, plates racking up as staff – squeezing between patrons – struggle to buss their tables.

There are supposed to be people here from all 50 U.S. states. But every American I meet seems to be from Colorado – Denver, Fort Collins and that Protestant Vatican which is Colorado Springs.

Initially, the National Prayer Breakfast had been just that: National. Now, though, very international. First evidence of this are the Lebanese BABES who drift through the delegates. Smell them a mile off: ‘strange synthetic perfumes, / Unguent, powdered, or liquid drown the sense in odours.’

I follow the scent up to the Middle East ‘suite’ on the 6th floor. There’s some spread: baklava and figs and Turkish coffee boiling on a stove. No alcohol of course, so our time is limited. But I am there long enough to be lambasted by a succession of young Arabs – and from diverse destinations – Egypt, Lebanon and Syria. The accusations concern the latter. Young brilliant Beirut biochemist: Why didn’t my country step in when it had the chance? ‘Now you have made two mistakes’, I’m told:

2. Staying out of Syria.

The difference between these mistakes, the asymmetry between acts and omissions, fail to impress my biochemist; and both accusations presuppose Obama has what he termed in a recent New Yorker interview ‘joystick powers’ according to which he can ‘manipulate precise outcomes’. But the situation is too urgent to countenance those questions: the biochemist reels off figures double the BBC’s – a total death-toll of 120,000; two million Syrian refugees in Lebanon. Beirut’s infrastructure will buckle under the pressure. Imagine London, two million extra people? I can’t. Self-interest, that’s what – to his mind – links 2003’s interventionism with 2013’s isolationism. And when, the next morning, the President elects to speak on religious freedom and not the Syrian crisis… well, they feel betrayed.