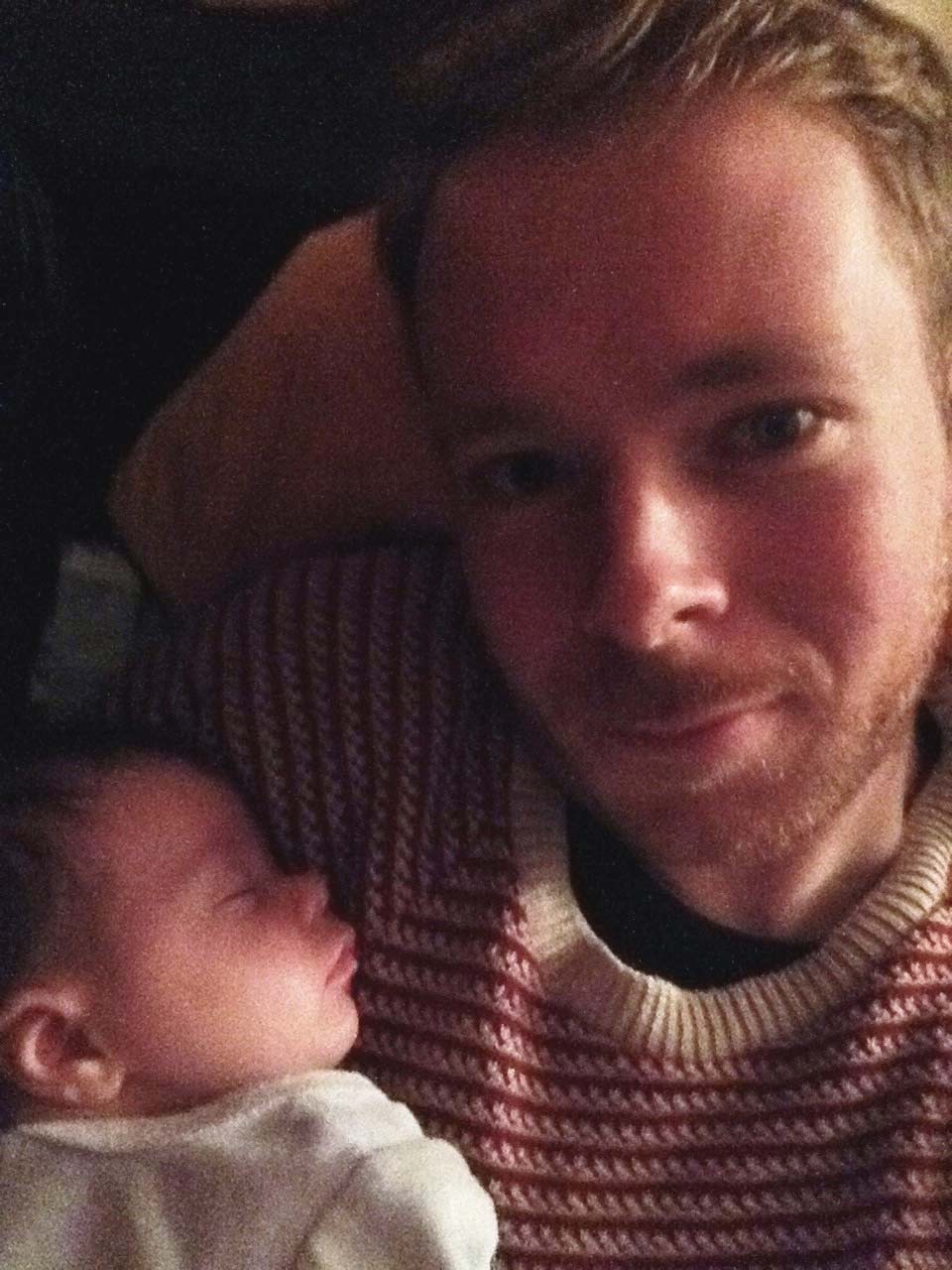 I’d been sleeping, blissfully unaware. Then my wife woke me up.

Sorry? The apology illustrates the kind of person Ju is.

I sat up, looked at my watch, tried to fight off the drowsiness. 1:00am. I’d been asleep for an hour and a half.

It really shouldn’t have come as any surprise that labour had started. It was early Thursday. The baby was due Saturday. And our first daughter had been about three weeks early. But even so, somehow I hadn’t been expecting it. I felt both excited and nervous.

‘The contractions started at midnight,’ Ju continued; ‘I didn’t want to wake you too soon. But they’re really bad now.’

I rubbed my eyes and tried to think: ‘How far apart are they?’

‘Four minutes’, she told me, looking at the Contraction Timer she’d installed on her iPhone. The frequency startled me slightly because it indicated that the labour was well under way. Contractions, as parents will know, can start off slow and sporadic, sometimes continuing for hours, even days, before settling into a rapid rhythm. The midwives tell you to hasten to hospital only when they reach intervals of four minutes. When, two years ago, Ju had gone in to labour with our first child, the contractions had started twenty-three hours before Beth finally arrived. We showed up at the hospital only to be sent home again. This time, though, it looked like the baby was going to arrive quicker.

I picked up the phone and rang Ju’s sister-in-law, who lives round the corner and had offered to babysit our daughter. Excited, she’d said she’d come straight over so that we didn’t have to wake Beth.

Then the next contraction started. I held Ju’s hand as she tensed in agony. I hated seeing her in pain. When it had passed, I tried to hurry around and get ready, wishing I’d been more prepared. As I helped Ju get dressed, we were interrupted by another contraction. I googled the number for St Mary’s birthing centre; told someone we were coming in, only to realise a few minutes later I’d rung a centre of the same name in London, not the one I’d intended in Leicestershire. I was annoyed by my mistake: more time wasted.

Ruth arrived. I put the hospital bag in the car and set up the Sat Nav. I helped Ju out of the house and got her strapped into the passenger seat. As we set off I looked at the dashboard clock. 1.30am.

I tried to drive calmly and carefully. Ju sat in silence. I asked her to tell me when her contractions were starting and stopping so I could try to keep track of them, using the clock on the dashboard. The city centre was quiet and deserted. Yet every set of lights seemed to turn red against us.

When we’d crossed Leicester and were heading north out of the city, Ju started really squirming in her seat. Now in a lot of pain, I wished there was something I could do.

Ninety seconds apart? Impossible. I must be measuring them wrongly.

That was when I started to panic. The Sat Nav said we were twenty-four minutes from the birthing centre. I felt a rush of adrenaline and put my foot down. We left behind us the built-up sprawl of the suburbs, pursuing the road across the countryside towards Melton Mowbray.

Next Ju unbuckled her seatbelt to try and get more comfortable. Which made me nervous. But I didn’t object.

Now the dual carriageway had become a winding country road. We passed a hamlet.

‘We have to stop. The baby is coming.’

Nine minutes from the birthing centre. And thirty seconds of indecision. Keep going and hope that Ju lasted the final few minutes? Or stop now and risk the baby being born on the roadside? My gut reaction was to carry on, but I knew that Ju wouldn’t tell me to stop unless we really had to. So I slammed on the breaks, pulled in at a deserted bus stop.

I put on the hazard lights and took out my phone and dialled ‘999’. Now Ju was writhing in the seat.

‘Which service do you require?’

‘My wife is having a baby and we’re-‘

‘Sir, which service do you require?’

Keeping the phone to my ear I climbed out of the car and In the darkness hurried around to the passenger side and opened the car door. Ju was half on the seat, half off. I tried to hold her hand but she couldn’t sit still. Another voice came on the line and tried to ascertain the situation. I did my best to slow myself down enough to tell him what was happening.

I looked dumbly up and down the quiet road. There was a cluster of houses and what looked like a pub or hotel.

‘On the A607 between Leicester and Melton Mowbray. Nine minutes from Melton. I don’t know the name of the village but I think I saw a sign starting with ‘K’.’

He suggested a couple of names but I wasn’t sure. An ambulance had been dispatched but while we waited he peppered me with questions.  Was Ju conscious and breathing? How many weeks pregnant was she? How old was she? Medical conditions? Medications? As I answered the questions, I looked around for anything that could identify the name of the village, but found nothing. I saw a road sign and dashed the twenty yards to find out the name of the road. Main Street. Brilliant.

‘I’m going to tell you exactly what to do,’ said the 999 operator. ‘Is any part of the baby visible?’

I was crouching beside Ju, and I helped her turn round in the seat.

‘Is there any bleeding?’

‘Tell Judith not to try and stop the birth from happening. She mustn’t cross her legs or try to push the baby back in.’

As he spoke, Ju was getting out of the car and squatting in the road, just next to the raised curb-stone of the bus stop. She was partially obscured from view by the car and its open door but I still felt terrible. I tried to create more privacy by standing in front of her. Useless.

The operator was talking but the words washed over me. All I could do was watch as Ju reached down under herself where she squatted in the gutter. Suddenly the baby emerged, and she was catching it with her hands. She neither screamed nor shouted. If I looked away for a second I would have missed it. Now she was lifting it up against her chest.

We stared at each other, stunned.

‘The baby’s here!’ I garbled down the phone, tossing it onto the car seat and crouching beside them.

She nodded, holding the tiny thing against her chest. I saw the cord connecting them. The baby shuddered and started to cry: a frail, inoffensive wail.

I wanted to hold her, to hold them both, but I had to get the bag. It had fallen off the seat, its contents strewn on the floor of the car. I retrieved a blanket and returned, wrapping it round the baby. Picked up my phone again.

‘The baby is here,’ I said again. ‘Everything seems ok; it’s crying.’

‘Check the cord isn’t wrapped around its neck,’ he instructed me; ‘And wipe the baby’s nose and mouth to make sure the airways are clear.’

So we carried on waiting. All we could do was try and keep the baby warm.

A couple of vehicles had gone by – I was vaguely aware of the headlights passing. But now a police car slowed. I waved wildly, thinking it was the 999 response.

‘Are you ok?’, said the female officer, clearly having no idea who we were.

‘My wife has had a baby on the side of the road.’

Her eyes widened. She swung the car around and pulled into the bus stop behind us. I asked them the name of the village we were in for the 999 operator. It was Kirby Bellars.

The officers waited with us for the ambulance. In the flashing blue lights from the police car I could see that Ju was shaking visibly. We got her to sit back in our car and I started the engine and put the heating on. Losing my phone signal, the police officers directed the ambulance on their radios.

‘What time was he born?’

The elder officer confessed it was her first roadside birth, the junior that she didn’t have any children (which now she probably never will).

We hadn’t checked, not wanting to expose the baby to the cold air.

Finally the first paramedic arrived in a car. And the ambulance was hot on his heels. Together with the team we lifted the trolley on the pavement and helped Ju to climb on. They wheeled her up a ramp into the back of the ambulance, baby on her lap, still attached by the umbilical cord. Inside, they checked the baby over. It was a boy, we learned.

The younger police officer offered to drive our car to the birthing centre so I could go with Ju in the ambulance. I took the bag from our car and climbed up into the back of the ambulance. A paramedic took Ju’s blood pressure and filled in some paperwork.

As we drove to the birthing centre I looked at my wife. She smiled back, exhausted, relieved, our son in her arms.

Later we named him Reuben. And we decided that his middle name would be Kirby, to remember both the name of the village he was born in, and its curb.