You love Rev. I love Rev. Everyone loves Rev. That’s why the hit BBC comedy is so pernicious. Unbelievers who hate the church love the fantastic satire of an ins 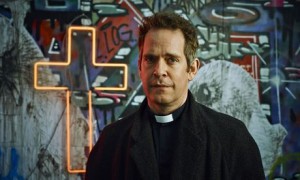 titution not long for this world. Unbelievers who like the church adore how it captures all those quaint little foibles. Believers who hate the church love how it lampoons everything they want to change. Believers who love the church also love it because it’s important to laugh about yourself. And vicars? Well, with a million viewers tuning in to every episode, they no doubt think that there’s so such thing as bad publicity.

But this love-in masks what is in fact a subtly damaging depiction of the church. Rev is insidious because it’s just so good. The third series, which wraps up this evening, has been as brilliant as the first two. Production company Big Talk has put together a masterpiece, pre-sold in 141 countries. And Tom Hollander, who plays the Rev Adam Smallbone, has cemented his reputation as one of the funniest actors of his generation. But when asked why Rev is so good, the usual answer cites “an insider viewpoint” on an inner-city vicar. Which is precisely what it’s not. Rev is an outsider’s imaginative construction of an insider viewpoint – a secular take on the sacred. The Church of England has of course long proved a comedy piñata. Richard Curtis has been eating the candy his whole career. Yet Hollander set out to do something different from The Vicar of Dibley. He wanted to show an institution operating in a grittier context.

Which is all well and good. Yet it remains an outsider’s perspective. An insider view of the church would, by contrast, revolve around the reality of shared faith. From the outset, Rev’s operating assumption is that faith is individual. The Rev Smallbone’s prayer monologues are purely personal. Faith is not something held in common. Nor is it transformative. Which is, rightly or wrongly, what people of faith think it is. Perhaps the show’s most wonderful character, the drug addict Colin, is a parishioner Adam is genuinely friends with. But there’s never a question of faith freeing him from addiction.

In imposing its own outsider viewpoint, Rev defies the deepest ideal of a liberal, pluralistic society.

“The best you want for us is to be allowed to sit at your table. Using your silver and your china. And if we can learn to use it like you do, then you will kindly let us stay. We want to wipe the whole table clean… and sit at it in our own right.”

In Rev the devout do not speak for themselves and therefore are not permitted to sit in their own right at the high table of our national media.

Take the episode on gay marriage. The Church of England’s conservative official position is portrayed as heartless and behind the times. Adam, our hero, summons the courage to marry his gay friends in a secret ceremony. “God won’t bless our union?” says his bewildered friend. Adam: “God will. Of course He will.” You may think the church’s view of gay marriage ghastly. Or you may think it right. That’s not the point. By coming down on one side, and by pillorying the characters who support the church’s position, Rev again imposes an outsider’s viewpoint.

What would an insider viewpoint look like? And would it still be funny? Rev goes nowhere near the supernatural, even though that is essential to the self-understanding of believers. Let’s imagine a plot line that has a woman knocked over over on Shoreditch High Street. Her spine damaged, she comes to St Saviour’s and asks for prayer. With low expectations Adam agrees but suddenly she claims she’s been healed and runs down the aisle. Adam wife Alex invokes the power of suggestion but parishioners think it a miracle.

Now, that would be interesting, even funny. But don’t expect it in Rev. Denying the insider view denies the rich diversity of the church in England. This is both a lack of creativity and a failure of representation.