This article was first published by The Guardian on 04 January 2014 as ‘Hidden Cornwall: not beaches and ice-cream but poverty and violence’ 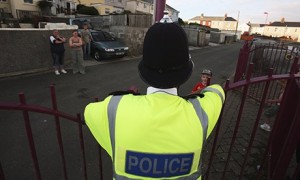 In the “Camborne corridor”, it is a sodden morning of heavy rain. The largest urban area in Cornwall, comprising Camborne, Pool and Redruth, is characterised by pockets of intense deprivation. I’m here as part of a recent research project for the Centre for Social Justice into areas of the country which Westminster policymakers have simply forgotten about.

The school carpark is a fair distance from the reception. Staring up at the sky, the storm looks unlikely to let up. So I make a dash for it. I hop over the flooded tarmac, the chalked hopscotch squares submerged and smudged.

The headmaster I’m here to interview begins by describing what mornings are like. Children often come into school “unkempt and unclean”. Some are not yet toilet-trained, even at age seven. And many arrive traumatised.

“They may have been shouted at, had a chaotic start to the day. They’re late… have witnessed physical fighting between siblings.”

Intense and angry, he leans forward across the table to vent his frustration. “We can’t teach children unless they’re settled,” he says.

At the next school I visit I’m told about a child who recently arrived with cut feet, stabbed by his father when he resisted having his toenails clipped.

This headmistress expresses the same exasperation. “Much of the time it feels like I’m a social worker … I feel like a jack of all trades and master of none. Talking to parents about hygiene, behaviour.”

‘But she adds: “They are barriers to teaching and learning. So I have to do it.”

This world far removed from the Cornwall with which I’m familiar: idyllic summers pottering around in dinghies, overpriced cottage rentals, an inexhaustible supply of (clotted cream) ice-cream. Some children here, at schools three miles from the coast, have never seen the sea.

Among their parents, two major problems are unemployment and domestic violence. On some estates in both Camborne and Redruth, a third of working-age people are claiming out-of-work benefits. While, as local MP George Eustice tells me: “Domestic violence is the number one issue for the police right now.”

The two issues are not unrelated, as one longstanding council worker on the Pengegon estate highlights. “What you have is boredom,” she says, “There are no hobbies, no outside interests. And no money to do anything. Couples on top of each other all the time because no one works. Niggling at each other constantly. And I think people just implode.”

Another woman I interview traces domestic violence back to addiction. Becky has had five children taken into care, and is expecting a sixth. She is optimistic about her baby’s prospects, however, because she is now with a new partner who, unlike her previous one, is not violent. Why is domestic violence prevalent in the area? “Partners are either raging alcoholics or speed freaks.”

The situation here in west Cornwall is complex, with causes and consequences difficult to disentangle, the social effects being, as social scientists like to say, “endogenous”.

And the situation defies traditional left-right analysis. For the right would be hard pressed to say all the problems here are social ones with social solutions. Clearly, here are multiple generations failed by the state, whether through its schools or its abject failure to retrain a workforce left high and dry by the decline of tin mining. While the left could only maintain I am overstating the social problems, or put them all down to lack of money, if they made sure never to visit the place.

If deciding on a diagnosis is difficult, settling on solutions has been even harder. For it’s not as if things haven’t been tried. Since 2002 state money has poured into the area. The last government’s neighbourhood renewal funding, along with European subsidies, have paid for massive investments in local infrastructure. These have indeed enticed new technology-based industries to move in. Yet the opportunities have bypassed the poorest, with the percentage of people in the region claiming out-of-work benefits remaining constant.

I also go to see a restored mining complex and visitors’ attraction which boasts botanical gardens, interactive exhibitions and adventure playgrounds. Heartlands has world heritage site status, which means, according to its website, that “it is recognised as having cultural importance on a global level, like the Acropolis in Athens and the Taj Mahal in India”. It is deserted.

But the greater tragedy here is the glaring absence of a vibrant voluntary sector. Across the Camborne corridor the kind of charities we know can prove so transformative in similar contexts – youth mentoring schemes, addiction treatment centres, welfare-to-work organisations – are thin on the ground.

“I can’t put a name to a single voluntary sector organisation working on the ground,” says one council officer working on the Pengegon estate. A vicar I speak to, Mike Firbank, concurs, speaking of “a dearth of visionary leadership”. While a teacher tells of charities who “come here one day and are gone the next”.

Seeking to account for this further feature of this deprived area, it is tempting to tear into the government’s big society project, given how much that agenda dominated the first year of David Cameron’s premiership.

But the truth is not only that, while the rhetoric has waned, Nick Hurd has quietly carried out important initiatives as civil society minister – the National Citizen Service, to name but one. It is also the case that the phenomenon of charitable “cold spots” in this country – the absence of voluntary sector activity in places of greatest need – runs far deeper.

The real problem is that charity in Britain is hugely centralised. As far as our giving goes, we are a generous nation. As the Centre for Social Justice’s (CSJ) recent report shows, money overwhelmingly goes to the largest charities, which outgun community-based ones in terms of fundraising and outmatch them in terms of visibly achieving.

In the last decade the concentration of cash among the big boys has only increased. Today 3% of charities spend three-quarters of the sector’s total expenditure (£28bn). It’s not all about finances, yet our giving mechanisms do make it difficult for local money to reach local charities.

Obviously, national charities do great work. It’s not a question of either giving local or giving national. It’s a question of proportion.

And the same is true of causes. Who would fault someone for giving to medical research? But, according to the Charities Aid Foundation’s most recent giving survey, Britons are three times more likely to give to medical research than to the homeless (and seven times more money). Worse, twice as much is given every year to animals than to the elderly. Of the money we give away, then, do we allocate enough to tackling poverty?

The CSJ’s six-part two-year long diagnosis of the extent of poverty and social breakdown in Britain. It will hopefully form the basis for the new ideas and fresh thinking on reversing social breakdown, to be published in 2014. And helping to develop charitable work in places like the Camborne corridor must be an absolute priority. Because, as William Beveridge understood, writing in Voluntary Action, his much-neglected third report of 1948: “Time after time philanthropy is seen breaking in on official routine, unveiling evils, finding fresh channels for service, getting things done that would not be done for pay.”

James Mumford is an academic, writer and former researcher at the Centre for Social Justice