The fight for your life is now raging 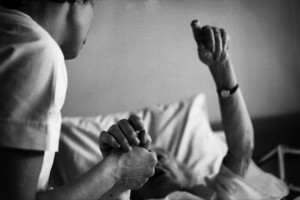 Beneath your noses, a great change in this country is being planned. Secret polls have been taken, and a private member’s bill has been tabled. The euthanasia lobby is limbering up for the fight of its life: to change the law for once and for all.

The Assisted Dying Bill, introduced by former Lord Chancellor Lord Falconer, is the fourth such to come before the House of Lords in the last decade. Since it is almost identical to the last bill, which sought to let doctors supply lethal drugs to terminally ill patients and which Parliament rejected in 2006, why is this one being introduced?

The answer has largely to do with the changed composition of the Lords. Dignity in Dying, formerly the Voluntary Euthanasia Society, hopes that of the 200 new peers ennobled since 2006, enough can be swayed to secure a majority in favour of legalising euthanasia. Accordingly, the barons are being bombarded with literature and badgered by prominent parliamentarians. The former Labour whip in the Lords, Baroness Jay, is one of them.

The plan of attack looks like this: the bill, first introduced in May last year, receives a second reading in the House of Lords in 2014. It may not make it into law imminently, but the modest proposal will find its way into party manifestos a year from now, before becoming a major plank in the social policy of any Lib-Lab coalition after 2015.

The vice-chair of Dignity in Dying, Dr Philip Graham, a psychiatrist, believes the battle will be bitterly fought. Though he thinks public opinion in general has shifted, as he told me, ‘Those in favour are more passionately in favour, those opposed more passionately opposed.’ Graham draws a sharp distinction, as does the draft bill, between assisted suicide and assisted dying — i.e. between enabling anyone to end their life and helping to hasten the deaths of the deeply suffering terminally ill. Uncomfortable with the idea that people who are suicidal but not terminally ill should have the right to end their lives, Graham wants to see Falconer and not a jot more. (Indeed, if Dignity in Dying were to campaign for an extension of the grounds to include assisted suicide, he says he would resign.)

The faults in Falconer are manifold, however, and it is crucial that they are exposed. For example, the 11 peers who comprise the Living and Dying Well think tank have emphasised how unreliable prognoses of terminal illnesses are ‘at the range [the bill] envisages’ — six months out. We just aren’t that good at predicting death. The peers have also highlighted the alarming potential hazards of ‘doctor shopping’ if the bill were passed: as we’ve seen in other countries where euthanasia has been legalised, some medical practitioners are more willing to sign than others.

But the more important point is that we run the risk of being naive about ‘choice’. Falconer states two doctors must confirm that the candidate ‘has a clear and settled intention to end their own life which has been reached voluntarily, on an informed basis and without coercion and duress.’ That sounds fair, but life and death are never that simple, are they?

For the last three years I have been working for a Westminster think tank, the Centre for Social Justice. I was part of an extensive research project looking at the reality of life for the poorest older people in Britain. I visited care homes in north London where people had been left abandoned in wheelchairs on landings during construction works, as sawdust fell down on them. Palliative care nurses took me to visit elderly men dying of lung cancer, whose only interaction with human beings was with the professionals paid to care for them. I surveyed ‘back-to-back’ houses in inner-city Leeds, where a frail widow told me about having to crawl up steep staircases on all fours. I met with hospital geriatricians who bore witness to men and women with dementia turning up in A&E in the middle of winter dressed in summer clothes. Again and again the comparison with the way black and other ethnic-minority groups treated their elders was devastating: unlike minority groups, all too often white Britons just don’t seem to care about old people.

Meanwhile, from the body of dedicated men and women working in impressive institutions like Age UK, the message which really stuck with me was this: older people do feel they are becoming a burden — to the state, to society, to their families. They may never say so, but our endless talk of the ageing society as a ‘demographic time-bomb’ has rubbed off.

And it is in this context that we are contemplating introducing euthanasia? Because the whole point about the ‘coercion’ Falconer is adamant to avoid is that the more powerful it is, the less explicit it will be. How do we know if a terminally ill person feels pressured to hasten their death? They will certainly not admit it.

Liberalism as a philosophy has always insisted upon exit routes. You shouldn’t be able to sell yourself into perpetual slavery, even if you do so freely, because you can’t reverse that decision. Euthanasia, failing that test, is therefore illiberal. Falconer adds to his bill an almost template ‘Form of Declaration’, to be signed by the person seeking to end his or her life. It reads: ‘I make this declaration voluntarily and in the full knowledge of its significance. I understand that I may revoke this declaration at any time.’ Is this some kind of sick joke?

Euthanasia advocates complain about the way their opponents bleat on about ‘the thin end of the wedge’. But the reason we do so is because, as with the whole abortion issue, we have seen wedges getting thicker. What started out as an urgent measure to help distressed women in desperate circumstances has become 190,000 abortions a year and rising. Incremental steps, minor adjustments, tiny turns — that is how great and terrible change occurs.