The Iniesta of Hollywood: A tribute to Philip Seymour Hoffman

Found dead in T-shirt and shorts, with a needle in his left arm and 70 bags of heroin in his apartment. I really can’t believe it. 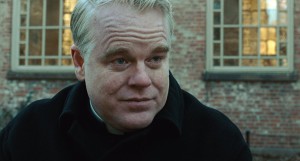 One of the greatest actors of his generation. Gene Hackman, Brian Dennehy, Alan Arkin, Kevin Spacey – Philip Seymour Hoffman lies in that line of legends. An actor whose choice of movies was impeccable. Who somehow managed to create on film the intimacy of the stage. And I want to claim him as an honorary Englishman too: nothing else explains his dryness, or just how good his comic timing was.

I’m in Washington D.C. for the week and I’m driving through the sleet down the George Washington Parkway and over Key Bridge and into Georgetown and thinking through my favourite Philip Seymour Hoffman moments:

Or the moment in Charlie Wilson’s War when, as CIA agent Gust Avrakotos, his religious credentials are being interrogated by society lady Julia Roberts:

Hoffman was of course an amazing lead. He was breathtaking in The Master, or as Truman Capote. But what the moments cited above demonstrate is how unselfish he was as An Actor in a Supporting Role. His record of assists was phenomenal. He was quite simply the Iniesta of Hollywood, for example, providing a cynical foil for Ryan Gosling’s young idealistic politico in The Ides of March And sometimes it was Hoffman’s assist play which made otherwise average films great.

I look out over the frozen Potomac and now I’m contemplating his end again, the way he died, and the sons he left behind. And it strikes me afresh, and I say this wishing it were otherwise, and with no trace of cold evaluative satisfaction, that in the end Being Good is as important as Being Good At.