The Turbulent Minister Is Right

First published in the April 2014 issue of Standpoint magazine 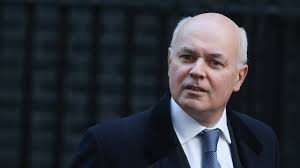 “Will no one rid me of this turbulent priest?” Those, or something like them, were the fateful words Henry II let slip in 1170. The cleric who had provoked the king’s ire was his Archbishop of Canterbury, Thomas à Becket. The monarch’s careless talk cost a life, for he aired his rhetorical question within earshot of four eager-to-please knights. They raced straight to Canterbury to bump off Becket on the steps of the cathedral’s altar.

Last summer I moved to America, just outside Washington, D.C. Living abroad has afforded me a new perspective on welfare reform at home. From here it looks as if the roles of Henry and Becket have been reversed. Now it seems that an Archbishop, Cardinal Vincent Nichols, wants to get rid of a minister — though, in our gentler age, the disposal Nichols probably imagines for the Work and Pensions Secretary Iain Duncan Smith is the Department for Culture, Media and Sport. (I’d take a quick death in my favourite cathedral any day.)

Exercising the “privilege” of speaking truth to power, the leader of the Roman Catholic Church in England and Wales has branded the government’s benefit changes “punitive” and the fall-out “disgraceful”. His strongest claim is that “the basic safety net that was there to guarantee that people would not be left in hunger or in destitution has actually been torn apart”.

The Cardinal Archbishop is not out on a limb. The Church of England’s hierarchy has backed him up, delivering its most blistering attack on the Coalition to date. Twenty-seven Anglican bishops and leading Methodists, Quakers and other Christians told the Daily Mirror making the difficult-to-substantiate claim that “over half of people who use foodbanks have been put in that situation by cutbacks to and failures in the benefit system, whether it be payment delays or punitive sanctions”.

In other words, the turbulence being inflicted on the welfare system is an increase in sanctioning activity. And it is true: more people than ever before are having their benefits suspended — mainly Jobseeker’s Allowance (JSA)— for failing to look for work, not participating in back-to-work initiatives like the Work Programme or missing meetings with welfare advisers. As many as 789,000 sanctions were imposed last year — double the monthly rate under Labour.

Despite this, from across the Atlantic it looks as if Nichols et al exaggerate grossly. Here President Clinton’s 1996 welfare legislation led to a far more stringent regime. The welfare rolls plummeted as lifetime benefits were limited to a maximum of five years and the new Temporary Assistance for Needy Families (TANF) introduced a looking-for-work component. Furthermore, in the Commonwealth of Virginia, where I live, sanctions are frontloaded: you are automatically disqualified from unemployment benefit if you’re found to have “quit your job without good cause”. More recently, in December 2013 Congress allowed to expire extended benefits for the long-term unemployed — an emergency measure put in place in 2008.

In Britain, by contrast, despite their rise this year, sanctions still only make up 6 per cent of those seeking JSA every month. And a significant amount of lost JSA is coming back to individuals via hardship payments. As for Nichols’s claim that the safety net for the unemployed has “actually been torn apart”, you don’t need the Department for Work and Pensions (DWP) to remind you that it continues to spend £94 billion per year on that net. You can simply listen to Shadow Work and Pensions Secretary Rachel Reeves lambast the Tories for profligately spending half a billion pounds more a year than her party did.

So a sense of proportion is missing. But the more fundamental question seems to be whether the church is on the right side of this argument. Not on the right side politically — i.e. whether Nichols is in tune with the popularity of welfare reform among many on lower incomes. And not even economically — whether the bishops should care more about getting the gargantuan benefits bill down. No, are the bishops on the right side of the argument morally? Have they really grasped what the turbulent minister is trying to do to the status quo? Or is Nichols actually opposing something which is a part, an indispensable part but a part nonetheless, of a larger reform package that really could change the country for the better?

To write about welfare is to write about a reality marked by trauma and tragedy, which makes it really difficult to do with sufficient sensitivity. Before I left the UK last year I visited an area of Cornwall, one of the most deprived in the country, where around a third of working-age adults are claiming out-of-work benefits. One head teacher I interviewed told me that she has had 11-year-old pupils tell her that “I don’t need to get a job because my parents don’t, and they’re fine.” When you’ve come out of that context, when you’ve never seen your siblings or parents or friends go to work, it must be daunting to have to turn up at a Job Centre and even start looking for something so alien as a job.

Nevertheless, there is wide agreement on the principle of sanctions. Go back to William Beveridge. In his original blueprint for the welfare state, the Social Insurance and Allied Services report of 1942, the great Liberal stated that there must be a flipside to the state providing someone with “adequate benefit for unavoidable interruption of earnings”. That flipside should be “the enforcement of the citizen’s obligation to seek and accept all reasonable opportunities of work”. The prospect of mass welfare dependency; of 1.4 million people receiving benefits in the last decade for nine out of ten years; of the huge numbers of unemployed remaining static during an economic boom — all this would have appalled Beveridge.

And today it’s not just the Right which insists upon responsibility. The MP leading Labour’s policy review, Jon Cruddas, has said that his party’s welfare reforms would be built around the concepts of “relationships, contribution and responsibility”. His colleague Lord Glasman agrees: “The move has got to be from entitlement to responsibility.” And back in January, when Rachel Reeves floated the idea of a basic skills test, leading to an offer of extra training for people, she made no bones about the conditionality component: “If you don’t [accept the offer] there will be sanctions.”

What such agreement shows is that welfare reform, despite the bishops, is not inextricably tied to a malevolent effort to demonise the poor. Just because Beveridge, Cruddas, Glasman and Reeves believe in responsibility doesn’t mean they blame the unemployed poor for their plight. And neither does Iain Duncan Smith.

We now know how bitterly the Cabinet has fought over the language of welfare reform. The Chancellor, George Osborne, characterised the unemployed as those “with their curtains drawn, sleeping off a life on benefits”. This lamentable caricature was to be bolstered by a Tory poster campaign pitting lazy thugs against hardworking families.

Duncan Smith, though, has never resorted to concepts like the “undeserving poor”. Forgoing any political capital to be had from strivers versus shirkers, the turbulent minister has instead blamed the system. A system so complex it baffles people. A system that disincentivises work. A system that traps people in poverty.

In the Channel 4 documentary series Benefits Street, there’s a moment when Fungi receives a letter from the DWP offering him a personal adviser who will first assess him and then provide support in getting him back to work. Fungi takes the letter to White Dee. She tells him not to worry. She’s had letters like this before. Nothing ever happens.

Ensuring that something does happen — what the government is doing at the moment — is painful, unpopular and in many cases problematic. But it puts into practice a principle all three parties in theory agree on — that is, until it has to be put into practice.

But the sanctions — again, this is the vital point — are only part of a package of reforms. For if sanctions are the stick then universal credit is the carrot — the brand-new system where six benefits will be rolled into one monthly payment and then reduced gradually as the person moves into work and earns more. The problem has been chronology: what we have right now is the stick; the carrot is yet to come. We still await the rollout of universal credit.

One of the biggest events in Washington last month was the publication of Republican Congressman Paul Ryan’s report, The War on Poverty. Ryan, Mitt Romney’s running mate in 2012, is chairman of the House Budget Committee and a potential presidential candidate for 2016. His 204-page report is hugely significant. It’s the launch of Compassionate Conservatism 2.0. It takes up only the task of diagnosing the problems — why poverty in the richest country in the world persists despite LBJ’s declaring war on it 50 years ago.

Predictably, the Left out here have written it off as a pseudo-foundation from which Ryan can later eviscerate government anti-poverty programmes. But in fact, outside the report, the biggest hint Ryan has dropped as to where his thinking is going has been to point to Britain’s welfare reforms. In a major speech at the beginning of the year he name-checked universal credit, hailing it as a solution to the disincentive problem that has dogged social policy for so long (that when you get a job you lose all your benefits at once).

There is, then, a certain irony to the current situation. A prominent American politician is looking for ideas about how government can do things differently. And he wants to pinch an idea from the Brits. But that idea, though legislated for, isn’t yet a reality in Britain.

It’s no secret that there’s no love lost between IDS and George Osborne. In Duncan Smith’s ill-fated and brief stint as Tory leader, Osborne used to prepare him for Prime Minister’s Questions. Now on equal footing in a Coalition cabinet Osborne has clashed constantly with his old boss. In his “inside story” of the Coalition government, In It Together, Matthew D’Ancona quotes the Chancellor as having told his aides that IDS is “just not clever enough”. Then, in 2012, Osborne tried to rid himself of the turbulent minister and replace him with Chris Grayling, now Justice Minister.

The Treasury has fought universal credit tooth and nail from the beginning. Why? Because, as a massive investment package for the poorest, it is expensive. Tapering off benefits puts pounds in people’s pockets. It will cost the Government an estimated £2 billion. That is the price-tag of diminishing the disincentive to work, and even now there’s a real risk that the Treasury may use the problems which have plagued the delivery of universal credit as an excuse to drop it altogether.

Such an eventuality would be nothing short of disastrous. Not only would it ensure that “love” never catches up with “tough”, but watering down universal credit would put us right back where we started — with a broken system, thereby scuppering the chance genuinely to impact the life-chances of men and women in Britain’s most neglected neighbourhoods.

The bishops have picked on the wrong minister. If Cardinal Nichols really wants to help the out-of-work, he should lobby George Osborne so hard that the Chancellor is forced to put out a restraining order on him. But the Archbishops of Westminster and Canterbury too should be ready to suffer the equivalent of political martyrdom in defence of Iain Duncan Smith.