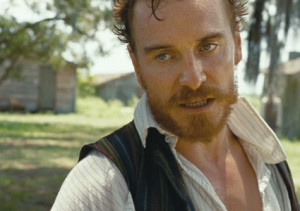 No saint: Michael Fassbender as slaver Edwin Epps in “12 Years a Slave”

The film 12 Years a Slave is breathtaking. See it. Based on the 1853 autobiography of a free black man captured in the North and transported to the South, it takes a long, unflinching look at the institution that was American slavery.

Aesthetically, the film is overwhelming, but in a deeply uncomfortable way. From the opening shot, the series of stills the director Steve McQueen offers us have the grandeur of a Gainsborough. Refusing to choose between painting landscapes or portraits, Gainsborough opted to portray the 18th-century gentry who commissioned his works against the natural environment which was their property. His combination of clean composition and perfect perspective — lord and lady in the foreground, ordered arable in the background — communicates a world distinctly at ease with itself, a world you want to live in, or at least retire to.

In 12 Years a Slave this aesthetic is carried over but the roles dramatically reversed. Now it’s servants rather than masters in the foreground, the background not their property, rather the site of their labour. This makes for uncomfortable viewing because the backbreaking toil and unwatchably brutal beatings take place against the loveliness of the Louisiana plantations, the fecundity of the fields, undisturbed algae over gentle bayous, Spanish moss drooping.

This contradiction, this lack of consonance between what the film looks like and what it’s about lies at the heart of many great films. Making a picturesque film about a horrible thing: that’s what any director taking on a historical travesty aims to do. But that contradiction is even more acute when those historical travesties happen to have taken place in idyllic locations. Shoot a movie about the First World War, and include close-ups of young men drowning in the mud of Ypres — aesthetically, things line up. But when the Allies fought the war in the Pacific — territory Terrence Malick explored in The Thin Red Line — what ensued was evil under the sun, mass killing under the palm trees of paradise, with wondrous birds and rare species spectators of the slaughter.

But the ugliest aspect of this beautiful film is its depiction of how slavers used the Bible to justify what they were doing. Understanding this legitimation is vital to how we view Christianity in the 21st century — how we answer questions about the relevance of the faith, its relation to history, its perspicuity.

The skewing of scripture features prominently in McQueen’s film because he has remained faithful to Solomon Northup’s narrative a year after his (spoiler-alert) rescue. This, for example, is how Solomon (played by the extraordinary Chiwetel Ejiofor) introduces his first master, the “good slaver” William Ford (the ubiquitous Benedict Cumberbatch): “In my opinion, there never was a more kind, noble, candid Christian man. Yet the influences and associations that had always surrounded him, blinded him to the inherent wrong at the bottom of the system of Slavery.” And the film also sticks to the text when it has the “evil” slaver Edwin Epps (played by Michael Fassbender in a performance as vicious and terrifyingly arbitrary as Ralph Fiennes’s SS officer in Schindler’s List) provide an exegisis of a parable from the gospel of Luke. This is the moral Epps takes from the story of the watchful servant: “That nigger that don’t take care — that don’t obey his lord — that’s his master — d’ye see? — that ‘ere nigger shall be beaten with many stripes . . . That’s Scripter!”

Well, is that scripter? That’s the question which looms large. Can you find an endorsement of enslavement in the holy book of the Abrahamic faiths?

For all its immediacy in 12 Years a Slave, the question is not a new one. It provoked a civil war for one thing, as the American historian Mark Noll argues in The Civil War As A Theological Crisis. That is, aspiring emancipators did not simply concede to Epps and his ilk that scripture sanctioned slavery, promptly discarding it for Enlightenment principles of liberty, equality and fraternity. Not at all. Rather, as Abraham Lincoln put it in the second inaugural, “both sides read the same Bible”. The forces which opposed slavery, wherever they were on the spectrum, also held to the authority of scripture. They simply argued the slavers’ interpretation of it was illicit. But who was right?

In the Hebrew Bible slaveholding in ancient Israel was qualified and curtailed in a way it never was in 18th- and 19th-century slavery. More like indentured servitude, rules governing the practice commanded automatic manumission after six years and prohibited any physical violence against slaves. According to Exodus 21, if a master even so much as touches a slave’s tooth he is to be freed.

By the time we reach the New Testament, and Jesus and Paul coming up against Graeco-Roman slavery, we find them clearly constrained by context. So, Jesus heals the centurion’s slave but does not demand his emancipation. Paul, though commending a runaway to his former master as “no longer a slave, but better than a slave . . . a dear brother”, can only hint at, rather than insist upon, that man being granted his freedom. In a world which was not their own, but occupied by foreign powers with foreign power-systems, the mission of the messiah, and the aims of the apostles to make this known, required some capitulation to — or, better, patience with — injustice.

That said, traceable across the New Testament are definite trajectories, certain arguments the implications of which are left unstated, as African Americans themselves highlighted throughout the 19th century. The Sermon on the Mount’s golden rule, “do as you would be done by”, led Daniel Coker to declare in 1810: “It is very evidence, that slavery is contrary to the spirit and nature of the Christian religion.”

Trajectories? Implications? Lest this seem wild retrojection, reading back modern egalitarian values into ancient texts, admit one more consideration. The reason we can talk about trajectories and implications is because the Bible is fundamentally dynamic. It is a sweeping drama, an immense movement driving towards God’s ultimate redemption of the world in Christ. And the social consequences which flowed from this — “there is neither Jew nor Gentile, neither slave nor free, nor is there male nor female” — could not but lead to the questioning of, in the words of Solomon Northup, “the idea of a man holding his brother man in servitude”.