What would you sacrifice for integrity? 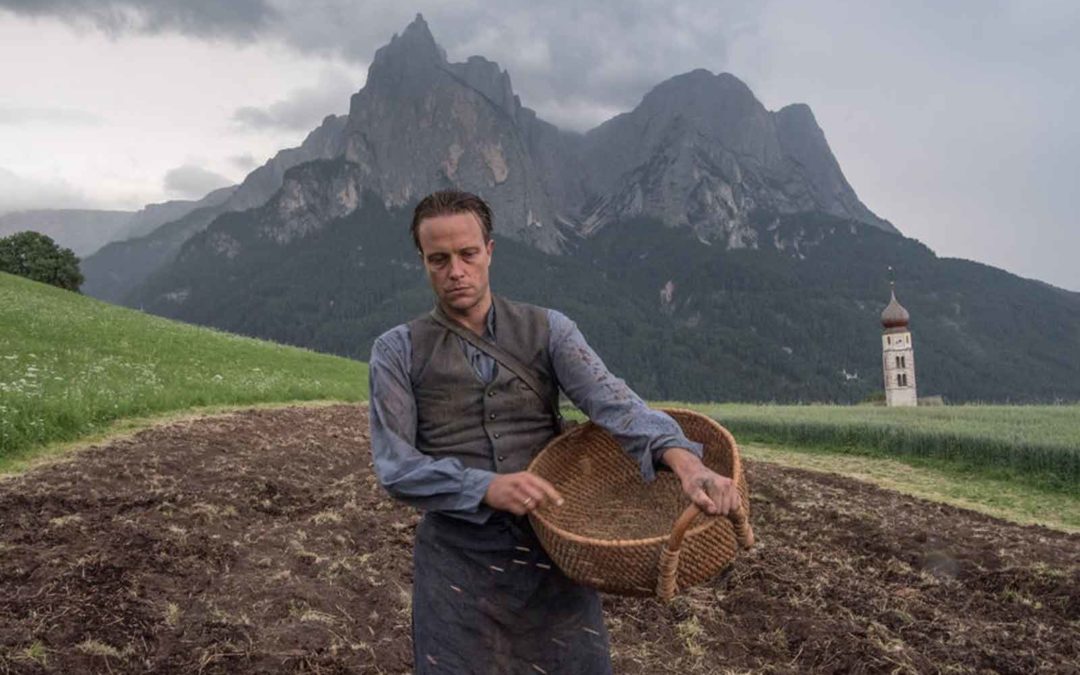 Franz Jägerstätter’s life is perfect — remote and romantic, lived in a valley in Upper Austria. Up in the mountains, there he feels free. His farm is plentiful. His children healthy. The woman he loves happens to be his wife. He rings the bells in his church and waltzes in his village-fete.

But then, the Anschluss. And then, Hitler comes to power. With this, his perfect life is shattered. The new Nazi regime demands obeisance and upon conscription, Franz must swear an oath of allegiance to the Führer.

“What do you do when your leaders are evil?” asks Franz, a devout Catholic. He faces a dreadful dilemma. For while he cannot countenance endorsing the Nazi regime, he is not a single man with only his own future to think about. He knows the consequences of his defiance for his family: his wife, Franziska, and their three children would be ostracised by their village and his death would leave them in a dire situation.

How Franz, a real-life conscientious objector in the Second World War, resolves the dilemma is what fascinates Terrence Malick in A Hidden Life— a film which sees the American director storming back to form. After a spate of what critics have dismissed as indulgent, sprawling cinematic offerings — too short on dialogue, too long on landscape — Malick has returned to plot. The film is still three hours long, and there’s plenty of wind rustling in trees, but this time the story is sufficiently compelling.

What makes the film a masterpiece, however, and not just another gripping Second World War yarn, is something else. The film affords Malick the opportunity to interrogate a philosophical choice that we all face all of the time. A Hidden Life is not just about a uniquely excruciating dilemma. No, Franz’s struggle is an extreme version of a fundamental option continually foisted upon us, in public and in private: do we work out what to do based solely on weighing up the consequences? Or are there times when we should pursue goodness regardless of the outcomes?

G.K. Chesterton said you haven’t understood a heresy until you’ve felt the pull of it. In A Hidden Life, Malick makes us feel the pull of the heresy of the former: making decisions based on consequences alone.

According to this heresy, called ‘consequentialism’ (its pernicious influence on late-modern life is greater than its obscure technical name might suggest), when you’re deciding what to do, all you should be thinking about are the outcomes. No act is right or wrong in itself. It all depends on the circumstances. Indeed, any act could, in a certain context, be considered legitimate.

The consequentialist resolution of Franz’s dilemma would be easy: swear the oath. Malick makes us feel the pull of this option by convincing us of the futility of Franz’s defiance. Franz lives a hidden life. He is not a leader whose refusal to capitulate might catalyse a rebellion. His martyr’s blood will not be the beginning of a movement. Only a smattering of people will even hear of his death; his story will be consigned to the “short and simple annals of the poor”. From his jailer to his lawyer to his priest, Franz is bombarded with the same questions: “What good is your defiance doing anyone?” “Do you think it will change anything?” “What purpose does it serve?”

And, yet, Franz persists in his defiance, right through to its tragic conclusion. His morality is the opposite of the consequentialist: it is based on integrity alone. This might seem strange to a modern audience, but it was, in fact, the basis of Western understanding of morality until the Enlightenment. An understanding which started with the Greeks.

Malick’s debt in this film to ancient philosophy — before he became a film director, he was an academic philosopher — is undisguised. And in one of the film’s many eloquent and poignant interior monologues (a Malick trope) we hear Franz allude to Socrates’s dictum that “a good man cannot be harmed”. It’s what the Athenian philosopher told the jurors who had just convicted him on the trumped-up charges of corrupting the youth of the city and introducing new Gods.

Socrates refuses to “stoop to servility”, refuses to beg for a more lenient sentence than death. Why? Because he thinks he would lose his integrity. For integrity is the one thing his jurors can’t take from him. The idea is that only you can violate your dignity, harm your soul. Even if you’re persecuted you will not be harmed. This determination to live according to principle regardless of the costs — the opposite of consequentialism — is what I think intrigues Malick in the film.

Malick is also that rare breed, a Christian filmmaker. From A Thin Red Lineto The Tree of Life, his films show him haunted by the question of God’s existence and reconciling that with the reality of evil. And what we see in A Hidden Life is the Socratic determination to live according to principle rooted in Franz’s Catholic faith.

How exactly? In the Sermon on the Mount, Jesus of Nazareth paints a picture of the moral life as a hidden life. Warning against religious exhibitionism and ostentatious ritual, Christ says:

He who is unseen sees… In Christian theology, living according to principle — the disavowal of consequentialism — is rooted in an assumption that although something may be hidden in human terms, in divine terms it is not. There is an audience for what you do, but it is an audience of one.

Today the consequentialist temptation faces us rather regularly in public life. The politicians for whom the ends justify the means; the radical reforms justifying the nature of the abusive campaign. The officials and generals for whom bombing innocent civilians to lower morale will end a war faster. But, in truth, consequentialism strikes closer to home. Your boss asks you to lie for them, and it seems that the consequences of refusing are worse for everyone. I shy away from confronting my friend’s marital infidelity because I fear the consequences will make things worse. What are we to do?

Live according to principle, and hang the consequences, seems to be Malick’s recommendation. And in saying this, Malick also offers a great encouragement, for he shows Franz experiencing an extraordinary peace when he comes to the decision that there are some things he simply cannot do, some actions he cannot perform.

“Right action,” wrote T.S. Eliot in The Dry Salvages, “is freedom from past / And future also.” I think he means that choosing to live according to principle is not only about defying the determinism which says your behaviour is governed by your past. Living according to principle is also about freeing yourself from the responsibility of the future consequences of your action.

To decide there are some convictions you simply won’t override, some things you simply won’t do, is ultimately to relinquish control. With self -limitation comes, paradoxically, a release. Almost an abandonment. Being true to yourself, a burden is lifted.