I’d only been in the U.S. for about six months when it arrived in the mail, slipping out of the Kroger coupons. I unfolded the full-page advert to find a series of amazing offers, but the one that really caught my eye was a CM15 .223 Rem AR Semi-Auto Rifle with Red Dot Sight. Awesome. Also on display was an impressive array of sub-compact semi-auto handguns. “Revenge” scopes, “defender” shotguns, speed pumps—an embarrassment of weaponry. 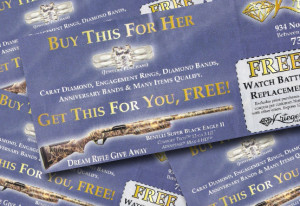 Fantastic, I thought. My wife Holly and I had been invited to a costume party, and now I could go as a Navy SEAL! One of these toy guns would be perfect. I’d never seen replicas like them. They were sleek, menacing, and unlike those you find in the UK, they didn’t have the annoying orange tips on the end so everyone knew they were fakes.

But then I look more closely. There was a problem. These “guns” were prohibitively expensive. At first glance I had thought the CM15 .223 Rem AR Semi-Auto Rifle was retailing at $6.99, very affordable for purposes of a costume party. But when I looked more closely, I saw that there was an additional “99” on the end.

Now unless in this country they place another decimal point onto things, the fact staring me in the face was that this replica was $700! For a cap gun? Who are you kidding? And the handguns were just as ridiculously inflated. Not $4.99 but $499 for a 22/45 Lite Anodized .22 LR Semi-Auto Pistol from Ruger.

I wasn’t only receiving coupons for cheaper laundry detergent that morning. Someone was offering to sell me an assault weapon.

Let me quickly say how much I love America. I wouldn’t be living here if I didn’t, and I never take for granted the generosity of this country in letting me work here. The last thing I want to be is a supercilious Piers Morgan exoticizing the locals.

That said, I was rather horrified by the advertisement. And knowing next to nothing about the state of the gun debate, the arguments and the politics, I thought to myself, “Gosh. Is anyone doing anything about this?”

Some time later I came across an online comment by a conservative chap talking about the sanctity of life. I was impressed. “So basically [it’s] a life vs. liberty debate. We already recognize in everyday life the fact that human life has more fundamental value than freedom.” Absolutely. I totally agreed. And the chap’s recognition of the essential trade-off was refreshingly realistic. What will it take to prevent another Newtown? Law-abiding gunowners, often in rural areas, sacrificing their freedom to own assault weapons because they realize that “human life has more fundamental value than freedom.” The chap must have been imagining the six-year olds at Sandy Hook cowering behind their teacher when Adam Lanza blasted into their classroom. The blogger was issuing a rallying call. We’ll do what it takes. We’ll give up what we have to. We’ll stop that from happening again.

Now I should at this point fess up. I am pro-life. I wrote my Oxford Ph.D.—published as Ethics at the Beginning of Life—analyzing the philosophical assumptions of both sides of the debate. To me, the Planned Parenthood scandal seems the ultimate commodification of the body under the conditions of late capitalism.

Moreover, I agree that in the end it comes down to a trade-off between life and freedom. Pro-lifers often sheepishly downplay what their view entails: radical restrictions to a woman’s autonomy, both in having to undergo pregnancy—a burden I will never experience—and then either embarking on the project of a lifetime in raising a child she didn’t choose or, if she opts for adoption, knowing her child is walking around in the world without her.

So it struck me as all the more strange that, in complete contrast to the abortion debate, when it comes to guns American conservatives reverse their priorities. They rank freedom over life. “I never saw a body with bullet holes that was more devastating than taking the right to arm ourselves away.” Dr. Ben Carson’s response to the Umpqua Community College shooting in Oregon befuddled me.

Presumably, those who own guns for self-defense wouldn’t accept the claim that they rank freedom over life. They would say the freedom to own guns is precisely a freedom to defend life, their own and other people’s. Yet are more lives saved than lost by people having such easy access to lethal weapons?

The sociologist Max Weber famously argued that the state should exercise a monopoly on coercive force, and we Brits basically subscribe to that view. Let the police do the policing. The fact that that assumption is not shared this side of the Atlantic is what I’ve been slowest to realize. Yet, and again this is just the tentative observation of an ignorant outsider, is there not a temptation in a machismo culture to overestimate one’s ability to be Jason Bourne when the time comes?

The NRA makes a powerful argument that, when it comes to public shootings, by glorifying violence Hollywood has a lot to answer for. I completely agree. But hasn’t Hollywood also inspired amateurs to believe that, if a ghastly shootout were to break out in the mall, they would coolly take down their targets rather than, clenching Baby Glocks in perspiring palms, misfire into innocent bystanders?

Then there’s this fuss about the meaning of the Second Amendment. Seems to me a storm in a teacup. Its language, to start with, is impossible. “A well regulated Militia, being necessary to the security of a free State, the right of the people to keep and bear Arms, shall not be infringed.” What a muddle! But then I’m a stickler for good prose.

Maybe it means you only get to keep a musket propped up next to the tumble dryer in the basement in order to be ready at a moment’s notice for a call-up to your local band of brothers. To march out against the U.S. Army like the Psylli tribe who, according to Herodotus, after the south wind had dried up their storage tanks, armed themselves and marched out into the desert to do battle with the wind. They lost.

(I recognize we Brits must take some of the blame for this. Not only did we pass on to you our now diminished fear of disarmament—in our case by a rather naughty king, a Catholic, James II, whom we wanted to vote off our island—we also freaked you out about the specter of a faraway government keeping a standing army.)

Or maybe the amendment designates—as the Supreme Court decided in 2008 in District of Columbia v. Heller—the individual right to keep guns for sport and self-defense.

I don’t have the foggiest notion who’s right. I’m not an American, let alone a constitutional lawyer.

But no possible reading of the Second Amendment can possibly excuse the fundamental hypocrisy here. Just because you’re free to do something doesn’t mean you should do it. Conservatives like me who care deeply about family values typically forego their freedom to sleep around.

Plus, a right is never absolute anyway. In 2008 Justice Scalia, writing the majority opinion in Heller, recognized that even the individual rights reading allows for a raft of gun-control measures—prohibitions on carrying weapons in public, extension of background checks, etc., etc. So there’s a lot for consistent pro-lifers to be campaigning for with as much vigor as they’re trying to defund Planned Parenthood.

Mass shootings by monsters armed with AR-15s, like the one in San Bernardino last December, constitute a fraction of gun violence in America. That’s the final argument I’ve heard bandied about a lot. But again it seems weird. For why should it matter that it’s a fraction of gun violence? Don’t fractions matter? Doesn’t a pro-lifer believe that “he who saves one life saves the world entire”?